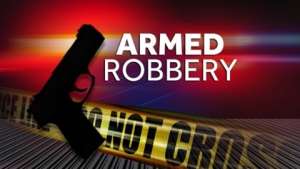 A female attendant at Glory Fuel Filling station at Akyem Abenase in Akyemansa District in the Eastern region is battling for her life after she was shot by armed robbers.

The robbers according to information gathered attacked the fuel station on Thursday evening at about 7:30 pm.

A second attendant at the fuel station, Doris Appiah narrates that they were going about their normal work when two armed robbers on a motorbike pulled up and pointed their pump-action guns at them.

She said the robbers asked that they surrendered their monies and any other valuable personal belonging they had.

Doris Appiah revealed to the media that one of the workers on the scene was violently pushed to the ground and one other was also shot.

The victim was rushed to a local health facility.

She was subsequently referred to the Eastern Regional Hospital in Koforidua but later had to be sent to the Korle Bu Teaching Hospital due to the seriousness of her condition.

The incident which was reported to the Police is now being investigated with officers working around the clock to bring the perpetrators to book.

This is the third time this year that fuel filling stations have been attacked in the Eastern Region.

Similar incidents were recorded when two gas filling stations in Koforidua and Larteh Akuapem were attacked by armed robbers in April.

Speaker Bagbin calls on Israeli counterpart in Jerusalem
22 minutes ago