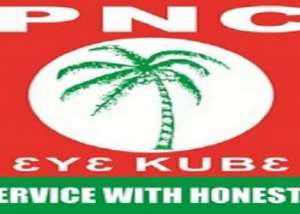 There was another confusion in the People’s National Convention (PNC) when the party’s leadership engaged in a confrontation over who can have access to the party’s headquarters.

It took the intervention of personnel from the Nima Police station to restore calm at the Abavana Junction headquarters in Accra.

Internal wrangling within the party since last year, has led to the party's headquarters being locked up by the police as two factions of the PNC fight over who can have access to the building.

The PNC General Secretary, Janet Nabila, accused the 2020 flagbearer of the PNC, David Apasera, of inciting some thugs to cause confusion at the party’s headquarters.

“By the time we got to the party office, Mr. Apasera had brought thugs. They were wearing Apasera’s T-shirts. What is painful is that Mr. Apasera is walking around the Nima Division of the Police Service to and fro without being arrested.”

In an interview, David Apasera complained about the removal of the criminal libel law, saying it had empowered people to spread falsehood about others.

In 2021, the headquarters of the PNC was similarly thrown into a state of confusion as party leaders engaged in heated exchanges during a press conference to brief Ghanaians on the suspension of Janet Nabila.

Internal wrangling within the party has been ongoing for several months now, with no signs of each faction backing down.

On August 28, 2021, the National Executive Committee (NEC) of the PNC took a decision to indefinitely suspend Nabila over gross misconduct, insubordination, and incompetence.

But she has so far denied all the allegations levelled against her, denouncing the suspension.

The PNC subsequently dragged David Apasera, and the National Chairman of the party, Moses Danibaah, to court for allegedly embezzling party funds.