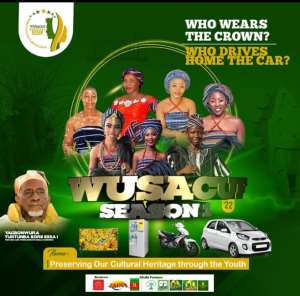 KAGA Foundation, lead organizers of the maiden edition of Wuripe Savannah Cultural Festival (WUSACUF), has announced Saturday, May 21 as the tentative date for the grand finale.

The much anticipated finale of the mixed gender reality show is on the theme "Preserving Our Cultural Heritage Through The Youth".

The seven finalists who vigorously went through weeks of both intensive and extensive exposure and self-discovery, are well groomed and prepared for the finals where one among them will be crowned winner and drives home the ultimate prize.

It is expected that the contestants who managed to sail through the competition to the final stage will compete keenly against each other in pursuit of the coveted spot, car and other souvenirs.

Organizers of the show which has endeared the hearts of many anticipate it to be a night of surprises because all the contestants would be involved in various cultural dances to prove themselves worthy to be adjudged queen or king WUSACUF.

It promises to be fun-filled because it is envisaged to be graced by people from walks of life.

This year's event, which is the first of its kind and has Wuripe and Sons Royal Lodge as headline sponsor with support from the Savannah Regional House of Chiefs, will have popular media personality, Adam Akilu Gideon affectionately called "Abrantie" as MCee for the program which will be broadcasted live on NTV.

It is also expected to be graced by a number of key stakeholders including prominent personalities such as chiefs and queen mothers, politicians, media practitioners, and a chunk of the entertainment or creative art industry players in the region.