Commemorating the Death of Franklin Roosevelt: Last Great American Statesman With A Grand Vision for Africa 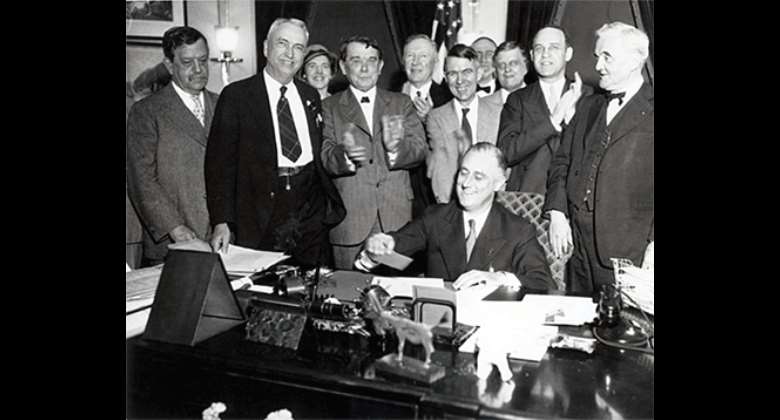 President Roosevelt in May 1933, signed legislation creating the Tennessee Valley Authority -TVA, and transformed the U.S. with his Grand Infrastructure Design

April 12 marked the seventy-seventh anniversary of the 1945 death of Franklin Delano Roosevelt (FDR), the 32nd President of the United States. FDR is revered for rescuing America from the Great Depression using Alexanders Hamilton’s economic principles, and saving the world from fascism with U.S. industrial might. Matthew Ehret in his article, The Anniversary of FDR’s Death, examines the underlying philosophical and strategic thinking of FDR, which without doubt qualifies him not only as a great U.S. President, but the last authentic American statesman.

It is no exaggeration to assert that the world would not be in the condition it is in today if President Roosevelt did not die before the end of his fourth term in office, or by some medical miracle, were still alive. Sadly, for the USA, and the world, none of his most significant policies survived his death, with the exception of the accomplishments of John Kennedy during his three short years as U.S. President. As soon as FDR died on April 12, the world changed dramatically, and not for the better.

We are still living through the terrible consequences of his death, especially regarding U.S. strategic relations with Russia and China. Rather than treating both these superpowers as geopolitical enemies in a falsely portrayed zero-sum world, President Roosevelt viewed both nations as allies against British colonialism. In his creation of the United Nations, FDR had Russia, and China join the U.S. and Britain as leading political powers. However, only President Kennedy, emulated FDR’s common interest approach to Russia, by proposing collaboration in a joint space program, despite the Cuban Missile crisis.

President Roosevelt’s firm opposition to British colonial practices, especially in Africa, is highlighted in Ehret’s citation of Elliott Roosevelt‘s revealing 1946 book, ‘As He Saw It’. A must read for all who oppose colonialismand desire to understand Roosevelt’s grand vision for a world of prosperous sovereign nations.

In ‘As He Saw It,’ Elliot Roosevelt quotes extensively from his father’s lecturing of Prime Minister Winston Churchill about the evils of British Colonialism, at their January 24,1943 Casablanca Conference in Morocco.

“Of course,” he [FDR] remarked, with a sly sort of assurance, “of course, after the war, one of the preconditions of any lasting peace will have to be the greatest possible freedom of trade.”

He paused. The P.M.’s head was lowered; he was watching Father steadily, from under one eyebrow.

Churchill shifted in his armchair. “The British Empire trade agreements” he began heavily, “are—”

Father broke in. “Yes. Those Empire trade agreements are a case in point. It’s because of them that the people of India and Africa, of all the colonial Near East and Far East, are still as backward as they are.”

Churchill’s neck reddened and he crouched forward. “Mr. President, England does not propose for a moment to lose its favored position among the British Dominions. The trade that has made England great shall continue, and under conditions prescribed by England’s ministers.”

“You see,” said Father slowly, “it is along in here somewhere that there is likely to be some disagreement between you, Winston, and me.

“I am firmly of the belief that if we are to arrive at a stable peace it must involve the development of backward countries. Backward peoples. How can this be done? It can’t be done, obviously, by eighteenth-century methods. Now—”

“Whichever of your ministers recommends a policy which takes wealth in raw materials out of a colonial country, but which returns nothing to the people of that country in consideration. Twentieth-century methods involve bringing industry to these colonies. Twentieth-century methods include increasing the wealth of a people by increasing their standard of living, by educating them, by bringing them sanitation—by making sure that they get a return for the raw wealth of their community.”

The P.M. himself was beginning to look apoplectic.” (emphasis added)

President Roosevelt’s commitment to foster economic growth in underdeveloped nations has been greatly misunderstood by the vast majority of people inhabiting both the advanced and less-advanced regions of the world . The Bretton Woods institutions: the International Monetary Fund, and the International Bank For Reconstruction and Development created by FDR in 1944, were not intended to be the perverse drivers of monetarist policy they have become today. As a result of decades of deliberate mis-information, it is virtually unknown that FDR instructed his representative at the Bretton Woods conference, Harry Dexter White, to create an institution that would foster economic growth for all nations, contrary to the intention of British representative, John Maynard Keynes.

I will be writing more about the Bretton Woods Conference and President Roosevelt’s Reconstruction Finance Corporation in the near future. Until then, Ehret’s article provides a useful broad backdrop to FDR’s policy. Read: The Anniversary of FDR’s Death