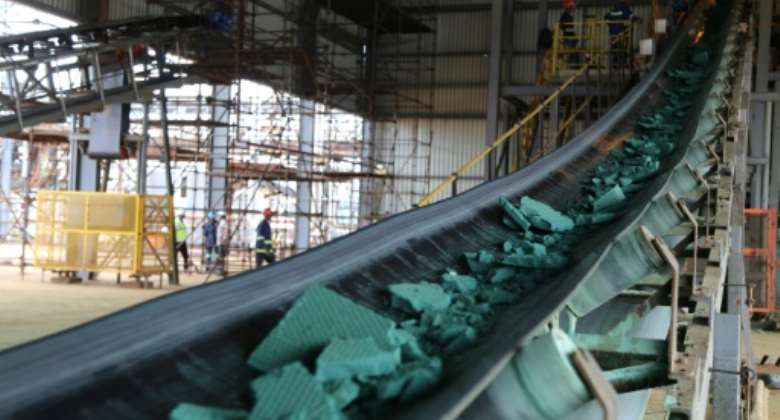 The 27 tonnes of copper slabs are securely lashed down on the back of Omar Rachidi's tractor-trailer. Now all he has to do is drive the cargo to its destination.

But that's easier said than done.

Two thousand kilometres (1,200 miles) of road lie between southeast DR Congo's mineral belt and the Tanzanian port of Dar es Salaam, from where the copper will be shipped to Asia.

And that highway is hard graft.

"Sometimes it takes two weeks to do the trip," says Rachidi, a 57-year-old Tanzanian, at the Chemaf metal processing plant at Lubumbashi in Haut-Katanga province.

"There are lots of queues, lots of tolls, lots of waiting at the border."

And the highway is the crucial but slender link in getting that wealth to market.

On Rachidi's truck, the copper plates, called cathodes, are loaded in bundles that weigh 2.3 tonnes a piece.

Each one is chained down "to prevent theft", says Chemaf's copper manager Eric Tshinkobo.

With copper reaching around $10,000 (9,200 euros) a tonne on the London Metal Exchange, the vehicle is thus hauling a load worth more than a quarter of a million dollars.

"Robbers attack us, especially on the road that goes around Lubumbashi," says Katema.

Jacob Daoudi, 45, another Tanzanian trucker who is hauling 30 tonnes of cobalt hydroxide, says the 80 kilometres (50 miles) to the Zambian border is fraught with risk.

"Bandits attack us, they rip the tarps, they grab our money," he says.

Attacks have become so bad that more and more trucking companies use a system of advance payment to cover road tolls on the DR Congo part of the trip, rather than have truckers carry a large amount of cash.

Six toll stations dot the 400 kilometres on National Highway 1 from Kolwezi in neighbouring Lualaba province, to Kasumbalesa, on the border with Zambia.

The queues there are notorious.

He wants more police patrols to dissuade robbers and for the number of toll stations to be halved.

The money goes to a Chinese firm that under a contract with the state builds and maintains roads -- an arrangement that routinely draws flak.

National Highway 1 is smooth and tarmacked, which makes it a relative pleasure to drive on compared with DR Congo's typically pot-holed roads.

But it has only two lanes, each flowing in the opposite direction -- the country still has no motorway.

At Kanyaka, halfway between Lubumbashi and the Zambian border, more than 200 trucks are waiting to get through a toll booth.

Truckers say driving in Zambia and Tanzania is far from perfect, but the tolls there are far lower than in DR Congo and queues and paperwork less onerous.

"There are hassles all the time in Congo," says Maniasi Djuma Makweba, 50, heading for Dar with 35 tonnes of cobalt he loaded at Tenke Fungurume Mining SA, located in the heart of the mineral belt.

Like other drivers, he complains about the thieves, but also about the security forces.

"When you go to the police to declare a robbery, they start by wanting to shake you down" for a bribe.