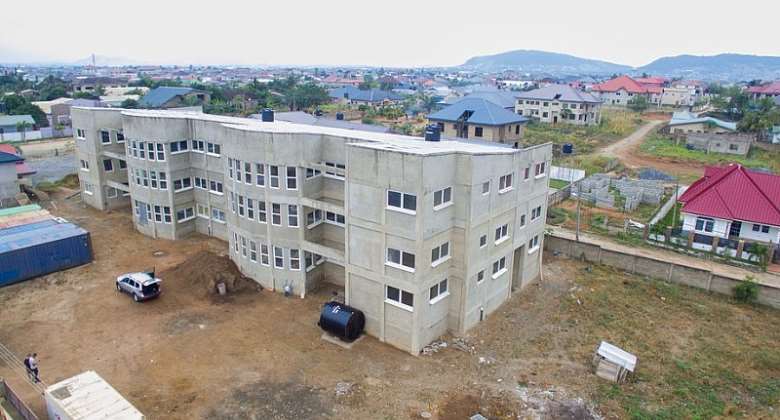 During the pandemic, the doctor Samuel Okae who works as a doctor in Germany-Dortmund builds a hospital in Ghana.

Samuel Okae stops briefly in front of the Dortmund Clinic. The trauma surgeon and orthopaedic surgeon is sitting in his twelve-year-old Peugeot, both hands resting on the steering wheel. He tilts his head and upper body to the left, looks up to the roof of the new ten-storey building on the other side of the street.

"Crazy," he said, took him nine years in Ghana to get thus far with three floors.

Samuel Okae, age 39, is a doctor building a hospital in Ghana. Its three floors have long been a shell of some 3500 square metres in Accra, the capital of the West African country.

When Okae was last there, at the end of 2019, all the windows could finally be put in. The German newspaper, SPIEGEL accompanied the medical doctor on the construction site. At the time, he hoped to complete his hospital within this year.

But construction often progresses slowly. Sometimes workers are missing, sometimes there is no money for the next step. And then came the Corona pandemic.

The Dortmund Clinic and the new extension are now getting smaller and smaller in the rearview mirror. Samuel Okae has been on the road since six o'clock in the morning. Without traffic jams, he will now be with his wife and children in time for dinner. During the car ride home, the phone keeps buzzing: WhatsApp messages and new photos of the construction in Ghana, calls from a bricklayer.

"I never actually have time off," Okae says. "The pandemic has slowed everything down, but we still keep going. As best we can."

Actually, he wanted to be back in Accra in April, tiling the entire floor and some walls with a team of volunteer tilers from Germany. But the borders were closed. "Then the shops closed too, there was nowhere to get cement," says Okae. "We lost many weeks."

This annoys him, especially because the pandemic has also shown how important it is to develop basic health care in many African countries. There is a lack of doctors and good hospitals. In Ghana, every second doctor leaves the country after training and goes to Europe or the USA. "The working conditions are too bad," says Okae, who was born and raised in Ghana.

In Germany, he has been working in Dortmund for eight years. He likes the city and he likes his job. But his heart beats for his homeland. Okae dreams of a hospital with several operating theatres, a children's ward, gynaecology and an emergency room. And because Ghana does not yet have what he wants, he started building the clinic nine years ago.

Samuel Okae on his rounds in the clinic in Germany, Dortmund

His plan: Up to one hundred doctors, nurses and orderlies should find good working conditions there. In the meantime, Okae has received several applications-word is getting around about his plans.