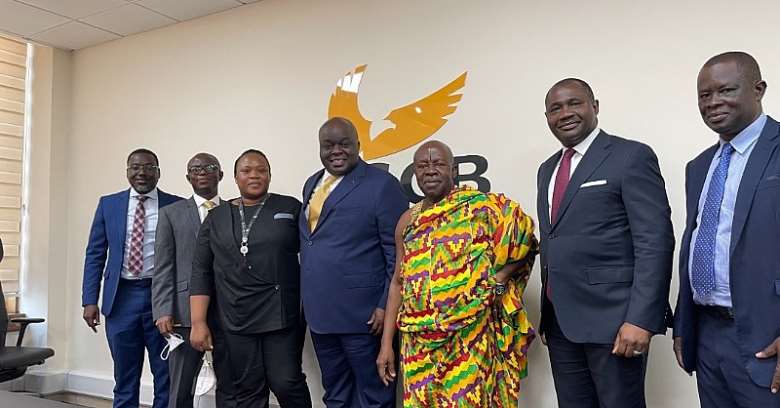 The President of the National House of Chiefs, Ogyeahoho Yaw Gyebi II who also doubles as the Paramount Chief of the Sefwi Anhwiaso traditional in the Western North Region area has paid a courtesy call on the leadership of GCB Bank PLC.

In an interaction with management, Nana Ogyeahoho Yaw Gyebi II commended GCB Bank for having the national interest at heart and added that there’s always the clamour for GCB Bank branches due to the strategic role the Bank plays in national development.

The MD of GCB Bank, Mr, Kofi Adomakoh expressed appreciation for the visit and congratulated Ogyeahoho Yaw Gyebi II for his election as President of the National House of Chiefs in November, 2020. He called asked for God’s guidance and the wisdom of King Solomon to discharge his duties with distinction.

Mr. Adomakoh stated that the visit was timely since in a few months, GCB Bank will commemorate celebrations for its 70th Anniversary which falls next year by recognizing the cultural and national heritage of the bank. He added that as a strategic national asset, GCB Bank is not only driven by profit motives but by social and economic development considerations and as such, the bank will continue to seek the interest of the Ghanaian.

Mr. Odartey Lamptey, DMD Operations who was at the meeting also emphasized that GCB Bank’s wide branch network is driven by the need to seek the well-being of the Ghanaians.

He added that GCB Bank is the first bank to establish a mobile money wallet dubbed G-Money which has a unique advantage of being telco-agnostic and as such it can be used by everyone irrespective of their mobile network. G-Money is currently utilized by many organizations including cocoa-buying firms who use it to pay cocoa farmers in a safe, secure, and speedy manner.

Also present at the meeting was Mr. Socrates Afram, DMD Finance and the Corporate Affairs team.