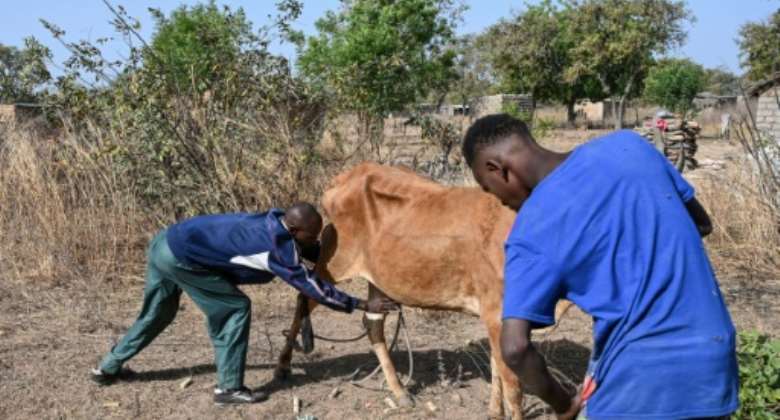 Amadou, a Fulani, catches an ox with his son. He says suspicions against his community have surged as a result of jihadist attacks. By Sia KAMBOU AFP

Jihadist attacks in northern Ivory Coast have ramped up hostility towards the Fulani, a mainly Muslim ethnic group that some accuse of providing the bulk of the raiders.

Friction and suspicion are almost palpable in Kafolo, a small town near the border with Burkina Faso where jihadists have struck twice in less than 18 months, killing 16 soldiers.

The army has established a large camp at the entrance to Kafolo and the few visitors are greeted by a watchtower overlooking the dusty trail leading to the town.

The army base in Kafolo. By Sia KAMBOU AFP

In the shade of a great tree, the air fresh and dry in the harmattan wind of the morning, village chief Bamba Tiemoko said the first attack in June 2020 had had dramatic repercussions.

"People were frightened -- it was the first time that this had happened to us. People stopped going into the fields or fishing," he said.

Some villagers said they were still afraid.

"We are always scared but we deal with it," said Lamissa Traore, president of the region's youth association. "We try not to stay in the fields too long, to come back before noon."

"I no longer go into the fields, I'm afraid to come across Peuls," added Clarisse Siphoho, secretary of a local women's association, referring to a name by which the Fulani are commonly known.

"Most of those who came and carried out the attacks are Peul. We are wary now."

'We are very suspicious'

In the absence of claims of responsibility for the Kafolo attacks, the Ivorian authorities have said they were the work of foreign nationals.

More locally the language is veiled, but the finger usually gets pointed at Fulani -- semi-nomadic herders who are scattered across several countries in West Africa and often cross the porous border with Burkina Faso to graze their oxen in Ivory Coast.

"We have our eyes on them," acknowledged a regional official who said the public were being urged to alert the authorities if they spotted anything untoward.

"We are very suspicious when a foreigner arrives in the village. We ask questions about his purpose of travel, his destination and we can take him to the soldiers," Tiemoko, the village chief, confirmed.

After the June 2020 attack, many Fulani who had been part of the community left overnight.

Ivorian soldiers in Abidjan carry the coffins of soldiers killed in the June 2020 attack in Kafolo. By SIA KAMBOU AFP

"There used to be a great brotherhood. But after the attack, there were arrests and the Peuls left," said Tiemoko.

"If they leave, it's because they blame themselves for something," he insisted.

"Because of the attacks, they were afraid of reprisals and left the village," said Siphoho.

'The jihadists have won'

One Fulani in Kafolo, going by the pseudonym of Amadou, said he had spent three and a half months in prison in Korhogo, the main city in northern Ivory Coast, because he was suspected of having a link with the attackers.

After being released, he returned to live in the area.

"Here, when people see a Peul passing by on a motorbike in the village, they are afraid and see him as a jihadist," Amadou said.

He said he was married to an Ivorian woman and did not feel sidelined by the community, although he wondered about the sudden departure of other Fulani.

Were they driven out by the townsfolk?

All those interviewed by AFP in Kafolo insisted that this was not the case, and their version of events was supported by municipal sub-prefect Issouf Dao.

"We welcome the Fulani, they have been here for a very long time," Dao said. "There's no problem — but there is mistrust regarding Peuls who we do not know."

While the strong military presence reassured local people, many deplored the consequences of the attacks, notably for tourism in the region, which has been classified in the red zone by most Western countries, restricting travel to necessary business trips.

In the Sahel to the north of Ivory Coast, years of jihadist attacks have ravaged the economies of Mali, Burkina Faso and Niger.

The Kafolo Safari Lodge has been closed for months due to the lack of tourists. By Sia KAMBOU AFP

The Kafolo Safari Lodge, with its 40 rooms and safari opportunities in the nearby Comoe National Park, one of the largest and oldest in the country, has been closed for months.

"People no longer invest, no one sleeps here, not even civil servants passing through the village," said Paterne Diabate, a villager.

"The jihadists have won this battle," he complained.