Ghana Has Become A Disaster Waiting To Happen 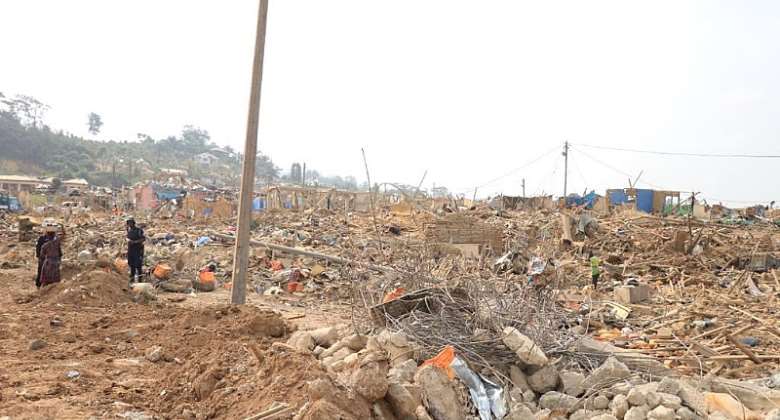 It didn't take the Apeatsie/Bogoso explosion to prove to us that Ghana is a disaster waiting to happen.

The signs have been there all the time.

Our police service is supposed to ensure public safety by protecting the lives of all the people who live in this country.

Yet a helpless 70-year-old woman, probably suffering from dementia, was caught in broad daylight, humiliated and beaten before kerosine was poured on her and she was set alight.

The police arrested some people, took them to court twice or thrice , and then –

there was a total BLACKOUT about the course of the prosecution.

Had the police deliberately discontinued the prosecution? If so, why? Did they obtain an order of nolle prosequi before discontinuing the prosecution? Does the law allow them to do that without the fiat of a judge? I have asked these questions about ten times at least, in articles I have written about the case.

Yet, I am not a lawyer. We do have a body that looks after legal matters on behalf of us laymen. It's called the Bar Association. It hasn't expressed any concern about this issue, as far as I know.

We also have a publicly-funded Commission on Human Rights and Administrative Justice (CHRAJ). That body too has not seen fit to address this blatant neglect of the right to justice of the murdered old woman and her family.

Finally, we have Occupy Ghana, Fix This Country, and several other bodies hat make a considerable amount of noise when broader political issues arise that threaten the operation of full democracy in this country. None of them has said a word about this horrendous murder and its aftermath, as far as I can see.

And so, for a good ten years and more, none of our civil rights bodies, whose members must have helpless, ailing mothers aged 70 and above, has found it necessary to take steps in the courts, or through a prodding of Parliament and the concerned institutions, to challenge the police for denying justice to the family of Madam Ama Hemma, the murdered woman.

How can they ALL fail to show the slightest empathy with the family of the murdered old woman? How can they so callously ignore the case of a woman whose murder was prominently reported on the front page of the biggest newspaper in this country, the Daily Graphic?

I do not exclude members of my own profession, the journalists. In many countries with a free press, columnists' concerns are usually taken up by the newsrooms and relevant enquiries made. How many newspapers, TV and Radio stations, have felt the need to ask the police questions about the action – or INACTION-- with which they have approached the horrendous case of Madam Amma Hemma? A case that constitutes a major blot on our sense of humanity in this country?

If we, as a society, condone the lack of concern by our established institutions, as regards one act of patent lawlessness, should we be surprised if other acts of lawlessness occur before our eyes?

The vehicle that was carrying explosives when it became a lethal bomb at Apeatsie on 20 January 2022. was supposed to travel ONLY IF IT HAD A POLICE ESCORT – according to the law that governs the transportation of explosives by motor vehicles.

Did it have a POLICE ESCORT at the time of the accident? So far, the answer has been fuzzy.

Should we be surprised if it didn't have a police escort?

I don't think so. Because, for all we know, officials of the organisation that transports explosives and the other bodies s involved in the sad misadventure, have become “chummy”, with the result that each looks after the interests of the other, at times. “Scratch my back and I'll scratch your back”, says an old adage.

(By the way, that situation is not as rare in Ghana as might be imagined. FOR IF THE COUNTRY AS A WHOLE CULTIVATES A CULTURE OF NEGLECT – WHICXH IS NO DOUBT THE CASE – THE CONSEQUENCES OF THAT NEGLECT CAN CATCH US AT ANY TIME!!)

Now, listen to this: last weekend, I travelled on the Accra-Kumase road, using the Nsawam road route. I was appalled to see so many potholes on some parts of a road so close to the capital, which means that people in authority often drive on it. The worst part of the situation is that parts of the road are so straight and inviting that drivers are tempted to speed on it.

And then, all too soon, our vehicle came across that stretch of road about 20 miles before Apedwa junction. And one had to ask oneself: were the road-makers serious or had they gone temporarily insane? For how can you insert so many bends and hilly blind-spots on a road that's the most important in Ghana and which now serves several of our neighbouring countries which use Tema port? We happily collect duty from them when they import goods from Tema. But we won't make sure that they can transport those goods safely to their countries.

Let me tell you what it's like to drive on that stretch of road. The driver of the vehicle in which I was travelling was sensible enough never to try to overtake other vehicles, when we were forced into one of the minor queues that were inevitably formed close to bends or hills. But although everyone could see that our SUV vehicle could go fast if it wanted to, other vehicles passed us whilst we were patiently waiting for a clear sight of the road ahead , before venturing to overtake the slower vehicles ahead of us!

One asks oneself in astonishment: what do these speeders think we are doing staying behind all those slow articulated trucks and other slow vehicles? Do they think that we do not know how to drive fast? Or do they suppose that we don't want to arrive at our destination in good time?

Of course, there is nothing to check them and make them drive sensibly! No speed traps; no hidden policemen stationed at dangerous spots to prevent foolishness on the part of careless drivers. So, everyone using that road is placed in serious jeopardy caused by unchecked morons!

If we were serious about road safety, we would send unmarked patrol cars to join the queues of vehicles and apprehend those undisciplined drivers who think they are the only people in a hurry, or are taking part in – a “Le Mans 24-Hours” race! But even if our police were concerned about the number of accidents we currently experience, on our roads, they probably do not have enough vehicles to try and prevent accidents on the roads, or they are using their vehicles for other purposes. So we travel with out hearts in our mouths.

Hence it was that one evening a few years ago, the vehicle carrying a close relative of mine that was driving along this particular road, was written off after it was hit by another vehicle that had lost control, having been struck by another, as it was overtaking it at one of the many blind spots on the stretch. I repeat: the vehicle was going along on its own path when it was hit by another that had lost control after colliding with another that it had hit because it was overtaking other vehicles in its own lane!

It was only sheer luck that saved my kinsman's life. Now, in any society that cares for human life, the police would have taken a cue from an accident of that nature and instituted immediate measures to prevent the same thing happening again at that spot and others like it.

But with our culture of neglect, even ordinary “DO NOT OVERTAKE” signs are lacking at some of the more dangerous spots on that road. Probably, accidents on that road are marked down as caused by ”MISADVETURE” CREATED BY “CARELESS DRIVING”, OR POSSIBLY, “DRUNKEN DRIVING” .

There are proven scientific ways of ending “careless driving” and “drunken driving” on the roads, in other parts of the world. CAN'T WE COPY THEM? We can import vehicles from them but we cannot imitate the measures they institute to ensure road safety in their countries?

Until our MPs make sure that no road accident that causes fatalities can be brushed under the carpet; until they interrogate and publicly shame the road builders who create so many unnecessary dangerous spots on the roads; until our society learns to prevent potential accidents by reporting careless drivers to the police and following up such reports to see whether the police acted upon them or not, we shall continue travelling with our hearts in our mouths.

Yet we call ourselves one of the “leading” countries not only in Africa but the developing world.