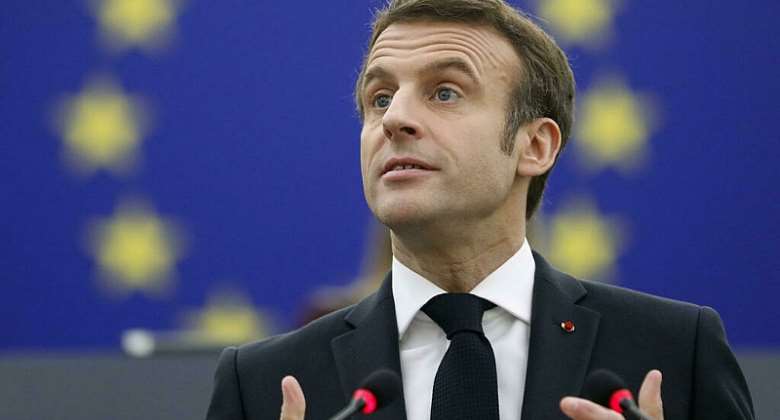 President Macron addressed MEPs on Wednesday, urging Europe to become a "power of the future", capable of guaranteeing its own security in the face of Russian military moves on the continent's doorstep. But French MEPs were more interested in debating his domestic policies.

Addressing lawmakers at the start of France's six-month presidency of the EU, Macron said the main challenges for the 27-member bloc were security, digital transformation and climate change.

The EU had to draw up proposals in the coming weeks for a new security deal that it would then negotiate with Russia, Macron said, calling for a "frank dialogue" with Moscow.

Speaking amid growing worries over a Russian military build-up at Ukraine's borders, Macron did not spell out what a "new stability and security order" could entail but said it must ensure Europe defends its interests.

"We will make sure that Europe makes its unique and strong voice heard," he told MEPs in Strasbourg.

The EU and Ukraine were not invited to US-Russia talks on security earlier this month and some European states fear they are being bypassed and their security concerns ignored.

"We must put together a joint proposal, a joint vision, a new security and stability order for Europe," Macron said, adding that Europeans would share the proposal with NATO allies before discussing it with Russia.

Macron advocates the EU having its own "strategic autonomy" in the field of defence.

He said that the bloc must bring itself to a position to make sure "it can be respected," including by making sure it is not too dependent on Russia for its energy supplies.

He said that France, together with Germany, wants to continue seeking a political solution to the tensions over Ukraine, in talks with both Russia and Ukraine.

The French head of state also said he would push to have the right to abortion and defence of the environment added to the EU's Charter of Fundamental Rights.

"We must update this charter to be more explicit on protection of the environment, the recognition of the right to abortion," Macron said.

"Let us open up this debate freely with our fellow citizens... to breathe new life into the pillar of law that forges this Europe of strong values," he said.

The call to enshrine a woman's right to abortion in the EU's charter, ratified by member states in 2000, comes just a day after the parliament elected Malta's Roberta Metsola, a staunch abortion opponent, as its president.

MEPs were allowed to ask questions after the speech, something French presidents are not subjected to in parliament.

French MEPs took swipes at Macron, just three months before presidential elections in which the incumbent is expected to run, and has a good chance of winning.

Yannick Jadot, who is running as the French greens party candidate, told Macron he would "go down in history as the president of climate inaction," saying he preferred to "sign armistices with the lobbies rather than wage wars on climate change".

"For France, but also for Europe, it is essential that you have only one mandate," MEP Jordan Bardella of France's far-right National Rally (RN) said.

Manuel Bompard, of the hard-left France Unbowed (LFI) said: "In three months, the French can ensure Europe gets rid of him."

Not a French election debate

"This is not a French election debate," said Roberta Metsola, as she struggled to move the focus back to EU matters.

Emmanuel Macron accused his opponents of misunderstanding the challenges facing Europe and France and misrepresenting his policies.

A staunch pro-European, 44-year-old Macron is hoping his proposals for a more assertive Europe could help secure him a second five-year term as French president.

While he has not officially declared his candidacy he has said he wants to run.

Opinion polls show he is the most likely winner of the April election but that it's not a done deal.

While Europe is not high on French voters' minds, polls show that questions of sovereignty, security and identity are.