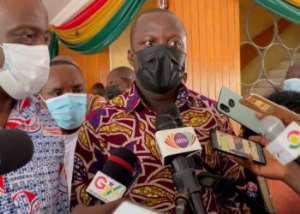 It appears the fight against the activities of illegal mining, also known as 'galamsey' will not be won anytime soon.

Speaking on the Breakfast Show on GTV on Tuesday, the Lands and Natural Resources Minister, Samuel Abu Jinapor, said, “I must admit that we are not out of the woods yet. We have not achieved the desired results yet. Indeed, we do not have a full grip on the issue of illegal small-scale mining in the country yet. It may take some 4 to 10 years to completely nip the menace in the bud.”

“Nevertheless, we also have to admit that we have made considerable gains, and we have gotten to a point where we can reasonably be encouraged that the proper framework and the building blocks have been put in place to deal with this age-old menace.”

He, however, stressed that government had made some considerable gains in its anti-galamsey fight.

“Government has been able to put in place the necessary reforms to regulate the mining sector.”

“I am referring to the process of acquiring license for small-scale mining, a platform for doing so, inspectorate division of the Minerals Commission, among others. Though we have not arrived at the point we seek to reach, we have so far made substantial progress.”

He said all the efforts government has so far made towards the galmsey fight are going to be sustained.

“We are not going to relent. What has happened in the past is that most of the measures put in place do not stand the test of time, and then there is a resurgence of the menace.”