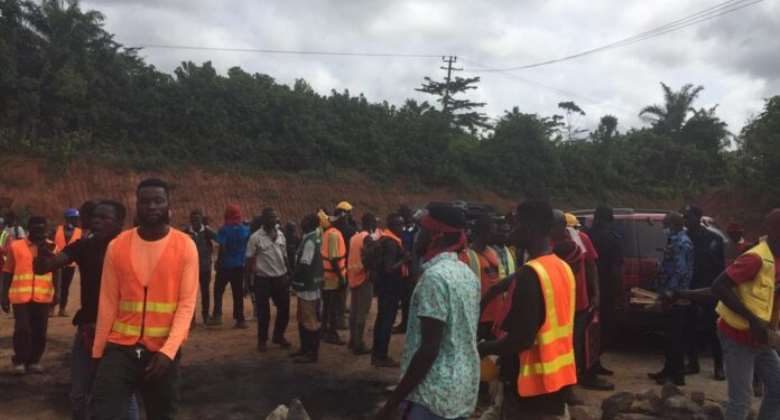 Work on the National Trunk Road (N8) from Assin Fosu to Assin Praso in the Central Region has stopped following an attack by irate workers on the Japanese construction firm.

The attack on the company occurred on the afternoon of Sunday, January 16, 2022 as a result of what sources say is unlawful dismissal of workers as well as the firm’s delay to pay workers after three months

Shimizu Dai Nippon Joint Ventures, a Japanese Road Construction Firm has been in charge of phase two of the road linking Assin Fosu to Assin Praso.

The unlawful act by some irate workers employed by the Japanese company is to demand for all unpaid entitlements to be settled and to push for workers to be treated well.

It followed a sit-down strike that lasted for two days as the workers demanded better conditions of service from the Japanese contractors.

During the attack, it is reported that the workers jumped the wall of the Japanese residence and broke into the room of Gozwe, one of the contractors and harassed him.

According to information gathered, the workers attacked Gozwe because they suspect he is behind the deimissal of some of the workers.

Fortunately, the Police received a complaint and rushed to the scene where the situation was brought under control.