Your Silence Is More Than Deafening, Speak Now Or Forever Hold Your Peace 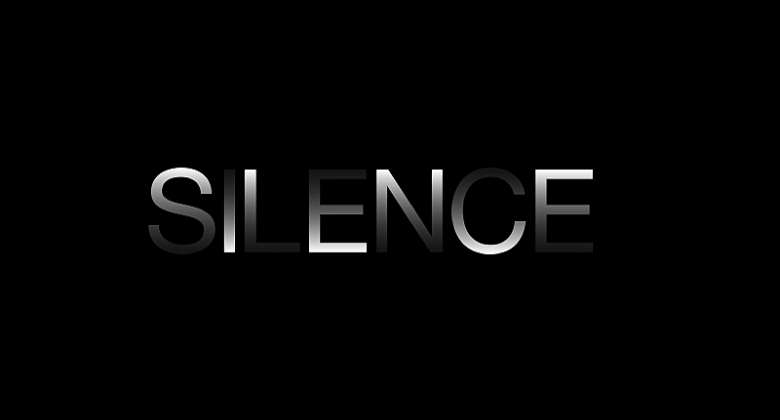 I have had several people, both friends and otherwise, ask, “Why do you seem as such a different person now in your older age than you were in your youth?”

Usually, I laugh at these questions or insinuations of all kinds because all my life, I have endeavored to live a very simple life; I guess that as one gets close to the ‘three scores and ten’ stage, one’s general attitude to everything changes, as one begins to question all things, particularly those that one had taken for granted all those years, beginning with not amassing wealth at any cost, especially from questionable sources but more on how one intends to leave this country in a ‘far better state’ than that which was bequeathed to him or her.

As you age, you begin to question yourself over how fairly you have treated others because you know deep down in your hearts of heart, you are most worried about how you will be received back home in the hereafter and equally important, how those you leave behind will be treated according to the weight and depth of your ‘sins’ here on earth or particularly how your children and their children will be treated for your name sake. That is when you come to full circle to the weight of how badly you treated others, when by just uttering a word, you could have changed their fortunes for the better, and for which they would have been eternally grateful.

You see, the JUDGEMENT or ‘SELF-INTROSPECTION’ begins here on earth before you leave. Sometimes, they manifest in the way and manner you leave:- long sicknesses, accidents of all kind, isolated lives of no-care as you antagonized all those who could have been there for you in your last years, months, weeks, days, hours and moments.

This world isn’t just about YOU amassing riches in any manner and mode, even when the cost of it is denying use of resources to develop facilities like schools, recreation / health centres and better roads for use by the general public. Funny but it is at this advanced ages that you realize that you had missed the whole essence of your life here on earth: ‘THE PRINCIPLE OF SOMEBODY’S CHILD – The Myth of Fleming - Churchill’.

This myth will always serve as the basis for HELPING OTHER PEOPLE’S CHILDREN’.

You see, any child, in our old traditional or village setting ‘belonged’ to somebody and that’s why a whole village in those days could contribute towards the education of their most brightest pupil, irrespective of who the parents were, except that they are members of the same village who cannot afford to educate the child. They all contribute, knowing that he or she will always come back to the community to support not only his or her parents but the entire community at large.

Evenmore importantly, the entire village believed in the principle that you never know who would be around at your worst or most critical need or moment: maybe not your own children but ‘SOMEBODY’S CHILD’. That is why it is always important to do ‘good’ at all times, not pick and choose, because the person to save you at your worst need, wouldn’t be your own child.

If you just can’t help other people’s children, please refuse to be a conduit for denying them use of national resources through corruption, or their share thereof: denying them access to proper education through equal opportunities.

And if you think you can’t help in any way except concentrate on your own core or extended family, at least you could join the ‘unseen faces’ with voices to SPEAK TRUTH TO POWER, and thereby ensuring that national resources are judiciously applied for the benefit of all, than just family and friends.

The OLD MAN ABOVE has a great sense of humour, and that is why He uses simple things of the world to confound the proud, self-conceited, hypocritical, arrogant and selfish people, who when they get to power forget, with no sense of appreciation, those people on whose backs and suffering they rode into office with the power of attorney to manage national or state resources for the general good other than themselves, family and friends.

If you are one of those ‘unseen faces’ with a voice to speak truth to power, but are sitting on the ‘fences of life’, pretending what is going on around the rest of the populace does not concern you, then it is a sad reflection of your own life; and you are better off reading the next passage of ‘FIRST THEY CAME’.

‘FIRST THEY CAME’ by Martin Niemöller

First they came for the Communists

Because I was not a Communist

Then they came for the Socialists

Because I was not a Socialist

Then they came for the trade unionists

Because I was not a trade unionist

Then they came for the Jews

Because I was not a Jew

To speak out for me.

MARTIN NIEMÖLLER (1892-1984), the writer, was a prominent Lutheran pastor in Germany, who emerged as an outspoken public foe of Adolf Hitler, and spent the last seven years of Nazi rule in concentration camps. He is perhaps best remembered for his postwar words, “First they came for the socialists, and I did not speak out…”

The quotation expresses Niemöller’s belief that Germans had been complicit through their silence in the Nazi’s imprisonment, persecution, and murder of millions of people. He felt this to be especially true of the leaders of the Protestant churches.

In 1920, Martin decided to follow the path of his father and began seminary training at the University of Münster. Niemöller enthusiastically welcomed the Third Reich under Adolf Hitler. But a turning point in his political sympathies came with a January 1934 meeting of Adolf Hitler, Niemöller, and two prominent Protestant bishops to discuss state pressures on churches. At the meeting it became clear that Niemöller’s phone had been tapped by the Gestapo (German Secret State Police). It was also clear that the Pastors Emergency League (PEL), which Niemöller had helped found, was under state surveillance. Following the meeting, Niemöller would come to see the Nazi state as a dictatorship, one which he would oppose till his death years later.

You see, if you become like MARTIN NIEMÖLLER and pretend to not see what has been going on for the past twenty-nine (29) years of the Fourth Republican dispensation of ‘WINNER-TAKES-ALL’ mentality, where once your party goes into opposition, you are denied any fair share of the national cake or opportunities, treated like you do not belong to this country: to the extent others with impunity will dare say to all that “We Are Taking Back Our Nation”, as if to intimate that the rest of us are foreigners.

People’s children have finished university, sometimes with great grades and yet, cannot be employed because they do not belong or they have been contracted to offer services to this nation under one regime but the next regime has to pay the bill but refuses to on the premises that, you do not belong to them – is that the kind of an all-inclusive people we want to be governed by? That state resources are only available to ‘them’ and not us because we do not belong?

Is that how far back we have retrogressed as a nation and as a people; and worse, those with voices to speak truth to power have faded back into their individual cozy circumstances sponsored by state, under all kind of disguises?

These same voices who were so vociferous during the reign of other governments in the past, the Church, becomes as mute as a popstar who loses his voice – Remember MARTIN NIEMÖLLER’s last stanza of ‘FIRST THEY CAME’ piece: Then they came for me, And there was no one left, To speak out for me.

Need I say more, when we have been more than quiet over the years since 1993 on CORRUPTION, UNFAIR ALLOCATION OF RESOURCES AND SERVICES TO COMMUNITIES, ABANDONED PROJECTS (as if developed by someone’s private resources and not state), NEGLECT OF PLACES (because that’s not where we get our most votes from during elections or come from), DENIAL OF OPPORTUNITIES (because our government is out of office).

What about those of us, who do not belong to the two dominant political blocks, WHERE DO WE BELONG IN THE SCHEME OF THINGS?

This is my sequel to Martin Niemöller’s piece: ‘SECOND THEY CAME’ –

Second they came for the NPP Appointees

Because I was not a NPP Appointee

Then they came for the NDC Appointees

Because I was not a NDC Appointee

Then they came for the TUC Executives

Because I was not a TUC Executive

Then they came for the UTAG Executives

Because I was not a UTAG Executive

Then they came for some GJA Members

Because I was not a GJA Member

Then they came for some Radio Presenters

Because I was not a Radio Presenter

Then they shot innocent bystanders during General Elections

Because I was not a bystander

To speak for me.

Need I say any more?