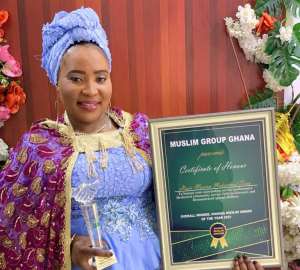 Renowned Muslim female Journalist Hajia Mariam Sissy has been adjudged the best Muslim Female Journalist for both Radio and Television at the recently held GhanaMuslimExcellence Awards.

She has also been crowned the Queen mother of all Muslims Journalists in Ghana for the year 2021 making her the first to hold that prestigious title.

The celebrated journalist whose career spans over a decade won the overall Ghana Muslim Excellence Award organized by Muslim Groups Ghana at the forecourt of Ablekuma Central Municipal Assembly on Saturday, January 1, 2022.

With an enviable track record over the years, Hajiya Mariam is a role model and inspiration to most of the young Journalists within the Muslim community and has been described by many as a woman with a golden heart. She is a philanthropist who cares for many vulnerable women and children in Zongo Communities.

Hajiya Mariam Sissy is famous for her high journalistic standards in the area of International reporting, hosting of live shows and News presentations in English and Hausa. She is known in many circles as “Margret Thatcher“ for her firm and strong work ethic.

Hajiya’s words of inspiration has touched many souls and transformed the living standards of many youth especially women through empowerment within the Muslim Communities.

According to the Coordinator of the Muslim Groups Ghana, Alhaji Abubakar Galaxy, the honor was as a result of her hard work, commitment to the society and support to the growth and development of Zongo Communities through her platforms (radio and television programmes).

He revealed that Hajia Mariam Sissy has impacted Muslim communities and is always going the extra mile to raise the profile of young Muslim women in journalism through her numerous associations. Information gathered from reliable sources indicates that she wants to initiate a Campaign on ‘Child beggars and Save the Streets’ soon.

On her part, Hajia Mariam Sissy advised Female Muslim Journalists to upgrade and equip themselves with the needed skills that would help them face the challenges associated with the job and position themselves on a higher level always ready to take up top positions without excuses.

She called on colleague female Muslim Journalists to engage in more philanthropic and advocacy works aside their profession as media practitioners.

This she said would help them to be independent of political influence and as well protect the vulnerable in the communities where they are disadvantaged.

Hajiya Mariam due to her passion and devoted service to community development is a gazetted Traditional Ruler under the Ga -Adamgbe National Council of Chiefs.

According to the multiple award winner, she dedicates all awards won since 2018, 2019, 2020 and 2021 to Almighty Allah, her Father, Family, GBC and DW - Radio Germany for the training and professionalism instilled in her.