By Louise Dewast with Aminu Abubakar in Kano
Nigeria 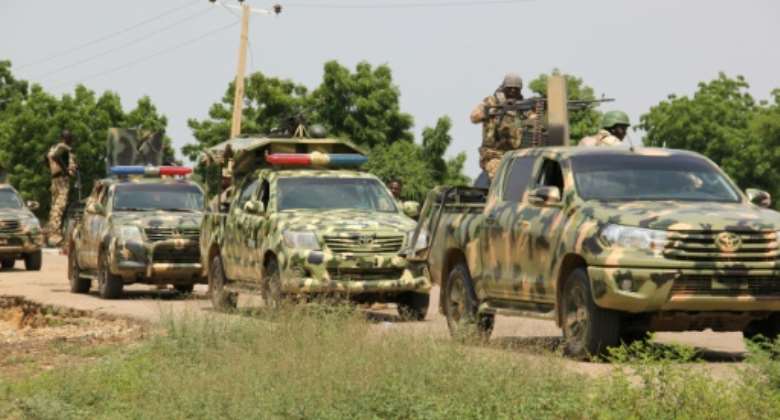 Security patrols like the one pictured here in Nigeria's northwest in October 2019 have failed to stem murderous attacks by gunmen. By - AFPFile

Nigeria said Sunday that gunmen killed at least 200 people and displaced thousands more in multiple raids in the northwest over the last week, dealing a heavy blow to authorities struggling to restore order.

Herders and farmers in Africa's most populous country have clashed over access to land in northwest and central Nigeria for years, but some groups have evolved into criminal gangs known as "bandits" who kill, loot and kidnap.

"Over 200 persons were buried... due to the invasion by bandits," she said in a statement confirmed by her spokeswoman Nneka Ikem Anibeze on Sunday.

"We also worried about the displaced persons who are fleeing in their hundreds from their communities," the minister added, saying that relief material was sent to Zamfara.

The minister said more 10,000 people were displaced when "their homes were razed by the bandits while scores are still missing."

On Saturday, four residents had told AFP that gunmen rampaged through Anka and Bukkuyum districts over two days, killing at least 140 people.

Babandi Hamidu, a resident of Kurfa Danya village said the militants were shooting "anyone on sight".

Bello Matawalle, the governor of Zamfara state that borders Niger, downplayed the violence and said only 58 people were killed.

Nigeria's President Muhammadu Buhari on Saturday condemned the attacks as "an act of desperation by mass murderers."

"We are fiercely determined to smoke out and destroy these outlaws," said the 79-year-old former army general, who is also battling a more than decade long jihadist insurgency in the northeast and separatist agitation in the southeast.

On Wednesday, the government officially labelled bandits as terrorists, saying it would help bring tougher sanctions, but analysts say the move is to enable the military to deploy more resources to the northwest.

Bandits made international headlines last year after kidnapping hundreds of students in a series of mass abductions from schools and colleges.

Students are often quickly released after ransom payments to the bandits but 200 were still missing in September, according to the UN.

On Saturday, 30 students and a teacher were released after seven months of captivity in Kebbi state, a local official said. It was not clear if any ransom had been paid.

Military and police operations are ongoing in the northwest.

Nigeria's armed forces said they had killed 537 "armed bandits and other criminal elements" in the region and arrested 374 others since May last year, while 452 "kidnapped civilians were rescued".

Security analyst Kabir Adamu, with Abuja-based Beacon Consulting Nigeria, told AFP that this week's raids could be in response to recent military operations.

"Angered by this, and perhaps by the fact that that they were facing certain death, (they) decided to move to other locations and in the course of this they seem to be conducting these attacks," Adamu told AFP.

Locals said the raids were in response to an attack by vigilantes on a convoy of bandits who were trying to relocate elsewhere in the state.