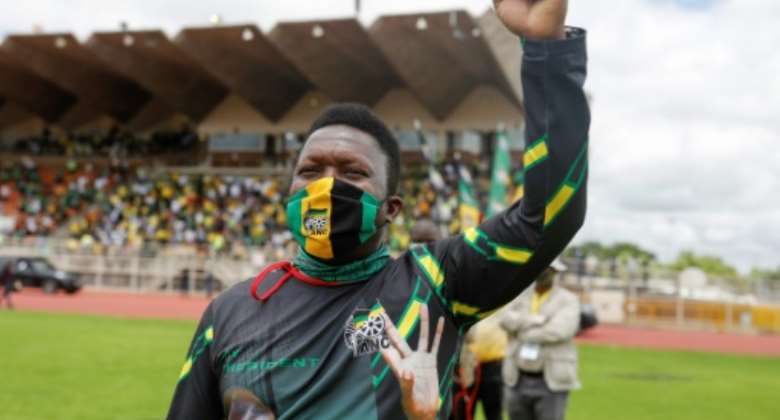 Covid restrictions meant a limited turnout for the event. By Phill Magakoe AFP

In the stands of a stadium in Polokwane, in northern Limpopo province, a few hundred party members sporting the African National Congress signature yellow, green and black dotted the terraces.

It was a far cry from the noisy and large crowds of supporters traditionally bused in for the annual festivities, thanks to Covid-19 restrictions limiting outdoor gatherings to just 2,000 people.

And the speech from President Cyril Ramaphosa, in which he referred to acts that had had "the effect of subverting our constitutional democracy", further dampened the party atmosphere.

President Cyril Ramaphosa listed the challenges the country had faced over the past year. By Phill Magakoe AFP

"These acts include blatant acts of state (corruption) and criminality... the concerted campaign of public violence and destruction that took place in July last year, as well as ongoing theft, destruction and obstruction of infrastructure," Ramaphosa told party loyalists.

"This anniversary takes place just a few days after a devastating fire swept through our parliament in Cape Town.

"The entire country has been shocked, outraged and saddened by the destruction because the institution of parliament is a repository of our democracy -- and symbol of democratic stability of our people," Ramaphosa said.

His government was, he said, "reforming our law enforcement agencies, our security sector, so that it's better positioned to defend the gains of our democracy".

The state suffered other setbacks over the past year.

Zuma was sent to prison for refusing to cooperate with corruption investigators.

The party of Nelson Mandela, which led the liberation of South Africa from the shackles of white-minority apartheid rule, has been weakened by historically poor electoral showings, factionalism and corruption.

Party officials are haunted by the possibility of an outright defeat in the 2024 general election. By Phill Magakoe AFP

On Tuesday, Ramaphosa received a report of more than 800 pages containing nearly four years of testimonies collected by a judicial panel on corruption.

Its authors accuse the ANC of having turned a blind eye to graft in state-owned companies that play a significant role in the South African economy.

Many of the plundered state companies were headed by CEOs whose appointments had been approved by the ANC.

The party had been guilty of ignoring "acts of indiscipline", he said.

"Those who are guilty of corruption, ill-discipline, factionalism and undermining our democracy find no home" in the ANC, said Ramaphosa.

He hoped the investigators' recommendations "can help to enhance the fundamental renewal and rebuilding" of the ANC.

In last November's local elections, most registered voters did not bother to cast votes, and the ANC's support at the ballot box fell below 50 percent for the first time ever.

Now party officials are haunted by the possibility of an outright defeat in the 2024 general election.

"The ANC is bleeding," said party supporter Themba Ubisi, 40, after the celebrations. "Either we renew the party or we perish."

Other supporters were more optimistic.

In comments to AFP, Justice Minister Ronald Lamola denied reports from one source that the party was broke. By Phill Magakoe AFP

"The party is self-correcting," said 45-year-old Khathu Mathoho. "There's a will to do things differently, but (some) elements are resisting change."

Ramaphosa vowed the party would be renewed. "Let us cleanse the ANC," he said.

One of the half-a-dozen clergymen who offered prayers, prayed for the ANC to make South Africa "great again".

But adding to their problems, the party's finances are in shambles.

One political source confirmed that the ANC was indeed "broke" and that in addition to unpaid taxes, the party had a deficit of at least 400 million rand ($26 million, 22.6 million euros).

However Justice Minister Ronald Lamola insisted to AFP that the party's finances were "stable".

In what was a wide-ranging speech Ramaphosa also tacked the issue of vaccine hesitancy, renewing his call for people to be inoculated against Covid to enable the recovery of the pandemic-battered economy.

"The ANC urges government to finalise a policy on the introduction of vaccine mandates for particular settings and activities," he said.