NPP tricked us twice in parliament, they begged us – Asiedu Nketia 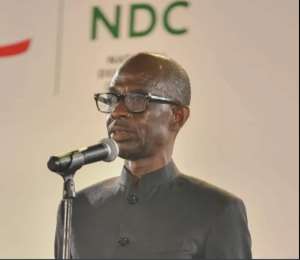 The opposition National Democratic Congress (NDC) has said the governing New Patriotic Party (NPP) tricked the Minority in Parliament in selecting the two deputy speakers of the House after the election of Mr Alban Bagbin as Speaker on January 7 2021.

Speaking at the 40th-anniversary commemoration of the 31st December Revolution in Accra, the General Secretary of the NDC, Mr Johnson Asiedu Nketia, said: “The leadership of NPP came to Parliament and actually came to beg us to allow them to select a first deputy speaker and in the end, [a] word was sent from the Presidency that they are also begging, so, we agreed”.

“Still, they persisted and virtually begged us that they do not want to disgrace Ghana.”

“NDC does not want this country destroyed, so, we agreed".

"Immediately, we agreed, the first statement that came from Osei Kyei-Mensah-Bonsu after the swearing-in was that we begged them and that there was no election in Parliament to select a first deputy speaker.”

“Those of you accusing NDC of not being interested in negotiations should listen carefully: As if that was not enough, immediately after the second deputy speaker was selected, he also addressed the press and declared his support for the NPP.

"What does that mean?: That the NPP used trickery to select the two deputy speakers,” Asiedu Nketia explained.