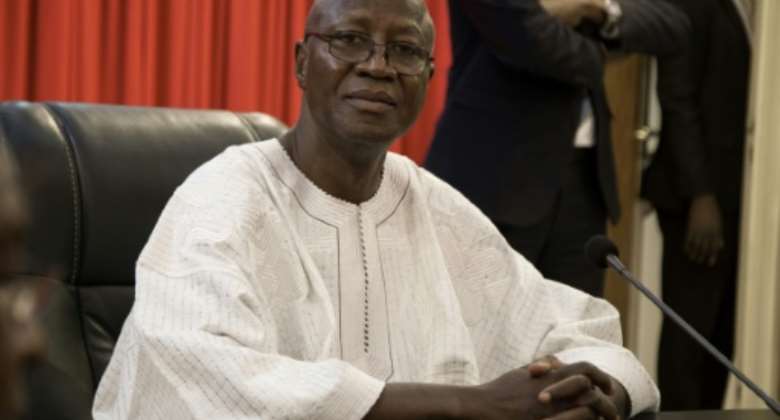 The resignation of Burkina Faso's Prime Minister Christophe Dabire and his government has been accepted. By OLYMPIA DE MAISMONT (AFP/File)

Burkina Faso's premier and government resigned Wednesday as protests mounted against officials' inability to combat a wave of jihadist attacks that have killed thousands.

After his resignation, Dabire called on citizens to "support the president... and the new executive that will be put in place" in a post on his Facebook page.

"I remain convinced that it is through unity of action that we will be able to meet the challenges our country and our people are facing," he said.

However the outgoing administration will be required to remain in a caretaker capacity until a new one is formed, government secretary general Stephane Wenceslas Sanou said, reading out the decree on public television.

Kabore first appointed Dabire in early 2019 as part of a reshuffle coinciding with a rising wave of jihadist attacks in the impoverished country.

He was reappointed in January 2021, after the president was re-elected for his second and last term.

Anger at the mounting toll has spilt out onto the streets of Burkina Faso. By OLYMPIA DE MAISMONT (AFP)

Dabire was previously Burkina Faso's representative at the eight-nation West African Economic and Monetary Union (UEMOA) and in the 1990s served as minister to former president Blaise Compaore, partly at a time when Kabore himself was premier.

Dabire's portfolios were for health, followed by secondary and higher education, and then scientific research.

Jihadist attacks have grown increasingly regular and deadly in Burkina Faso since 2015, killing 2,000 people and displacing 1.4 million from their homes.

Groups linked to Al-Qaeda and the so-called Islamic State group have plagued the landlocked Sahel nation since 2015.

Attacks targeting civilians and soldiers are increasingly frequent, and the vast majority take place in the north and east, spilling in from neighbouring Mali.

In mid-November, at least 57 people, 53 of them gendarmes, were killed in an attack on a police post in the country's north.

Anger at the mounting toll has spilt out into the political arena.

Groups linked to Al-Qaeda and the so-called Islamic State group have plagued the landlocked Sahel nation since 2015. By OLYMPIA DE MAISMONT (AFP)

The premier's resignation comes after the president last month stressed the need for a "stronger" cabinet on the eve of anti-government protests over the jihadist violence.

A week later, he pledged to root out corruption from the country.

In late November, around 10 people were hurt when the security forces using teargas dispersed a rally in the capital Ouagadougou protesting at Kabore's security policies.

Kabore was elected in November 2015, a year after Compaore, in power since 1987, was ousted from power for wanting to modify the constitution to extend his rule.

But the new president was confronted as soon as he took office with a gradual deterioration of the security situation, which he has so far been unable to control.