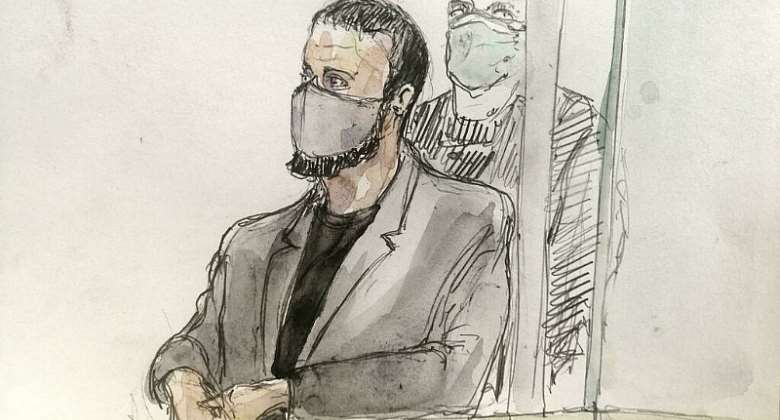 At the special criminal court in Paris where 20 men are being tried for their alleged involvement in the November 2015 terrorist killings, Tuesday's hearing featured the resumption of Belgian police evidence from Brussels. The careers of two of the accused . . . Mohamed Bakkali and Salah Abdeslam . . . were presented in detail.

In the course of a long series of unclear questions, delivered in a bizarre style of ironic humour, Ronen antagonised the police witness, otherwise pedestrian but cooperative, to the point where he pointedly reorganised his papers while she meandered through her criticism of himself and his Belgian police colleagues.

The police investigator testifying from Brussels remained cooperative, but his answers shortened to the monosyllabic.

Finally, the court president, Jean-Louis Périès, angrily asked Olivia Ronen to limit herself to questions, and to avoid adding commentary which "clearly insults" the witness.

That provoked a typically combative response from Ronen who insisted on her right to proceed as she sees fit.

"Mr president, I realise that my questions are subtle," she asserted, "and I'm entitled to ask them in my own way."

"Yes," replied an exasperated Périès, "but without the critical commentary which undermines the answers!"

It had been a long day for all concerned.
A €10,000 thank you gift
We started with the career of Mohamed Bakkali. He is 34 years old and has never had a normal job.

Despite surviving, officially, on unemployment assistance, he was in a position to loan his friend, Khalid el Bakraoui, 8,000 euros to help finance Bakraoui's wedding.

Bakkali admitted to Belgian investigators that his additional income came from robbery and the sale of fake high-fashion shoes and perfumes. He also sold fridges and washing-machines.

In May 2015, Khalid el Bakraoui paid back the wedding money, giving his friend a thank you gift of a further 10,000 euros.

That didn't come from Belgian unemployment assistance either. The Bakraoui brothers were swimming in cash following a successful bank heist which netted them €200,000.

Except that the Belgian police are not really sure about the wedding loan and payback story, suspecting that the 18,000 euros might have been a payment for some other service.

Mohamed Bakkali is suspected of having rented a car and several of the apartments used in the preparation of the Paris 2015 and Brussels massacres. He is also accused of providing forged identity papers for several of the terrorists.

Among the computers and other equipment seized as part of this investigation there is a video camera memory card containing ten hours of images recorded outside the home of the director of research at the Belgian nuclear energy agency.

Bakkali says he knows nothing about the content of the video card.

Dangerous men from Molenbeek
The rest of the sitting was given over to evidence concerning Salah Abdeslam, the sole survivor of the terror squads which killed 130 people in Paris on the night of 13 November 2015.

Telephone and other evidence, along with his own admissions, place Salah Abdeslam firmly in the ranks of the Paris killers.

His brother and business associate, Brahim, died in a suicide explosion at the Bataclan. Salah Abdeslam was a lifelong friend of Abdelhamid Abaaoud, the operational mastermind of the Paris and Brussels attacks. He was on terms with practically all the other killers in both atrocities, frequent visitors to the Béguines café which the brothers ran in the Brussels suburb of Molenbeek.