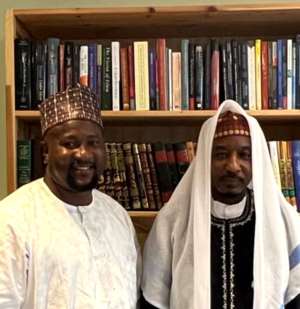 The spiritual leader of the Tijanniyah Sufi Order in Nigeria, Khalifa Muhammad Sanusi Lamido, one of the most influential Muslim personalities in the world and the 14th Emir of Kano will pay a six (6) day visit to Ghana in December.

The Emir's visit will be his first time since taking over as the Khalifa of Tijanniyah in Nigeria.

A broadcast journalist and philanthropist, Alhaji Sibaway Zakariya popularly known as Papa Angola made the disclosure on Accra base Marhaba Fm Saturday morning on a popular radio show at Nima Roundabout hosted by Hajj Galaxy.

He stated that Sanusi Lamido's visit to Ghana was initiated by the former organizer of the New Patriotic Party United States Of America Chapter, Alhaji Ali Suraj.

He revealed that Emir Sanusi Lamido will arrive on December 27, and visit the National Chief Imam of Ghana, Sheikh Osuman Nuhu Sharubutu on December 28 then proceed to Kumasi in the Ashanti Region on December 29, 2021 for a Quran recitation which is the main purpose of his visit.

The visit of Emir Sanusi Lamido has been described by a cross section of Zongo and Muslims in the country as a great moment in the history of Muslims in Accra and Ashanti Region.

Zongo Youths and Clerics believe that the visit of Sanusi Lamido marks the beginning of opportunities and encouragement to the people of Ghana.

This is due to his outstanding leadership and Philanthropic nature.

Born into the Fulani royal family, Lamido Sanusi became the 14th Emir of Kano in 2014 after the death of Ado Bayero.

He described the post, which carries enormous weight among Nigeria's northern Muslims, as a life-long ambition.

Muhammad Sanusi II became governor of the Central Bank of Nigeria in 2009 and was named in the list of influential people in 2011 by TIME magazine.

In 2013, he was awarded a special award at the Global Islamic Finance Awards for his role in promoting Islamic banking and finance in Nigeria and also became the 14th Emir of Kano in 2014 and is the grandson of the 11th Emir.

In the mid-1990s Muhammadu Sanusi Lamido quit a well-paid job as banking risk manager to deepen his knowledge of Arabic and Islamic studies by going to study in Sudan.