Memphis to honour Ghana in May 2022 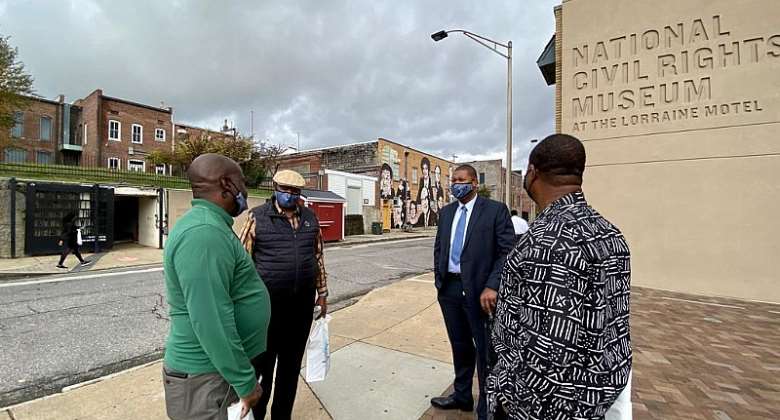 The City of Memphis in the United States of America is set to honour Ghana in 2022.

The honour will be part of their activities to unite countries through the art of film and TV production when their 100-acre, all inclusive production studio breaks the grounds in early 2022.

BLP founder Jason Farmer described this as a moment for Memphis, America and the world.

This revelation was made, when the founder and Chief Executive Officer of the African Global Sister Cities Foundation, Prince Kwame Kludjeson paid an exclusive two-day visit to the Bluff City to meet and interact with the founder of Memphis’s highly anticipated TV and film studio, BLP Productions Film Studios.

The Visit offered the Prince the opportunity to tour the 450 Mulberry Street and the National Civil Rights Museum.

The Global African Sister Cities founder expressed his excitement and satisfaction with the city and said “I love the city already and I wish my countrymen have a similar exposure”, as he smiles.

He indicated that the vision of Farmer is just in line with both Ghana and Africa as a whole.

The BLP founder indicated in his interaction with the Prince that, “this relationship with Ghana underscores the vision of the BLP team and also the vision of Kludjeson."

The visit was joined by a native of Memphis who is the Honorary Ghana Consul Sherman Banks. Banks revealed that Ghana will be honoured in May 2022 as part of Memphis’s recognition to Ghana for organizing a successful year of return in 2019 for the diaspora especially those of them in the USA.

It would be recalled that in 2019, Ghana invited descendants of America’s enslaved people to come home, as part of activities to mark the 400th anniversary of the slave ships arriving in America from their ports.

The two-day trip to Memphis brings the two countries full circle. the Prince had the opportunity to tour the National Civil Rights Museum to see what happened to the ships that left the shores of Ghana through the middle Passage, ending up in America, some in Memphis.

Dr. Russel Wigginton President of the National Civil Rights Museum, says the partnership will help people understand that we all have a history and generational tie, with the connection between Memphis and Ghana beginning with slavery in a culture of resistance.

“To try to restrict millions of people, yet their culture, their influence still seeks and finds its way through, to really influence what this country is today. It speaks to the power of the people who made tremendous sacrifices for us,” he explained.

In the cause of the visit Farmer and Prince held a business meeting and also to discuss plans for Farmer and his team to visit Ghana for them to work on how the two countries will concrete the discussions.

Prince Kwame Kludjeson whiles in the US initiated the honoring of H.E. Hajia Alima Mahama, Ghana’s Ambassador to the United States of America by the Sister Cities International Group on 6th November, 2021 in Washington DC.

Court withdraws arrest warrant for Xavier-Sosu after reporti...
48 minutes ago