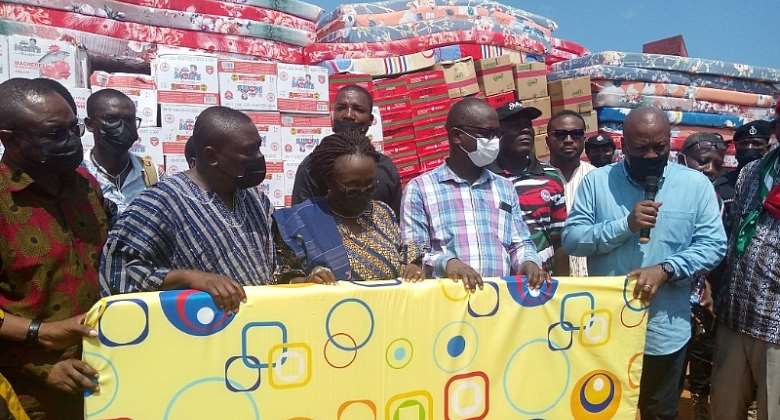 The governing New Patriotic Party (NPP) in the Savannah Region, has accused former President John Dramani Mahama of not appreciating the electoral fortunes he receives from them for the past decade.

They said this in a press rejoinder to former President Mahama's "if you can't provide relief items, at least visit tidal waves victims" comment at Keta in the Volta Region at a ceremony to present assorted relief items to the victims.

According to the NPP, towns including Salaga, Yapei, Buipe Daboya, Damongo and their environs all in the home region of former President John Dramani Mahama got flooded in 2020 but he never showed up as he did in the case of the Keta tidal waves.

"The road from the hometown of former president Mahama's biological mother, Busunu-Daboya was cut off. Indeed, this was a road that he dashed to his biological brother but the poor job contributed hugely to that disaster. He never came down with a penny as, neither did he come down with a grain of rice", part of the press statement revealed.

It continued, "it is more worrying to note, that the number of residents affected in the case of the former president's home region (Savannah) far outweigh the numbers in Keta".

RE: IF YOU CAN’T PROVIDE RELIEF ITEMS, AT LEAST VISIT TIDAL WAVES VICTIMS

The Former President of the republic, John Dramani Mahama has once again confirmed to the world, that the electoral fortunes he enjoyed for decades from his own people have never been appreciated by him. This unconscious admission stems from his recent effusions at keta. The former President in his submission at Keta said and I humbly quote “even if you cannot provide them with anything, just a visit to show that you care about them is important”. The penchant of the former President and his incapable NDC to politicize everything in this country is remarkably repugnant.

The home of the Former President Mahama got flooded in 2020. Salaga, Yapei, Buipe, Daboya, Damango and their environs got heavily flooded in their homes and farms somewhere last year. More than 5,000 residents were affected. Our own brother who comes across today as one sympathetic being never showed up. He never also came to his people with a penny. This year as well, residents of Bole District(the home of Mr. Mahama’ biological father); Nsunua, Tenyekura, Dakrupe, Ntereso, Chibrinyou, Agblekame, Bole, Mempeasem, Bole Choribang, Jama nsunua were hugely flooded. In Sawla Tuna Kalba; Bawuriyiri, Gbegu, Weigu-Kura, Samanbo, Siekura, Kulwong, Kawie and Dinie were equally affected. The road from the hometown of Former President Mahama’ biological mother, Busunu-Daboya was cut-off. Indeed, this was a road that he dashed to his biological brother but the poor job contributed hugely to that disaster. He never came down with a penny as, neither did he come down with a grain of rice.

It is more worrying to note, that the numbers of residents affected in the case of the former President’ home Region(Savannah) far outweigh the numbers in Keta.

May I admonish the former President and his NDC to desist from their incurable desire to run to town with petty partisan propaganda. This must be called out by all decent Ghanaians.

The people of Gonjaland demands an unqualified apology for the wanton display of neglect as confirmed by former President Mahama. We demand that a similar consignment as donated to the good people of Keta or more is sent to the victims of this year’s disaster. This must be done in earnest. We have done enough for former President Mahama and his NDC and therefore also deserve the goodies he is giving out to others. He must do to us what he’s preaching to others to do to the people of Keta.

Thank you and may the Almighty Allah bless us all.

Adwoa Safo impersonation: Findings from our preliminary inve...
23 minutes ago

Acting Speaker Joewise throws out minority’s motion to overt...
38 minutes ago