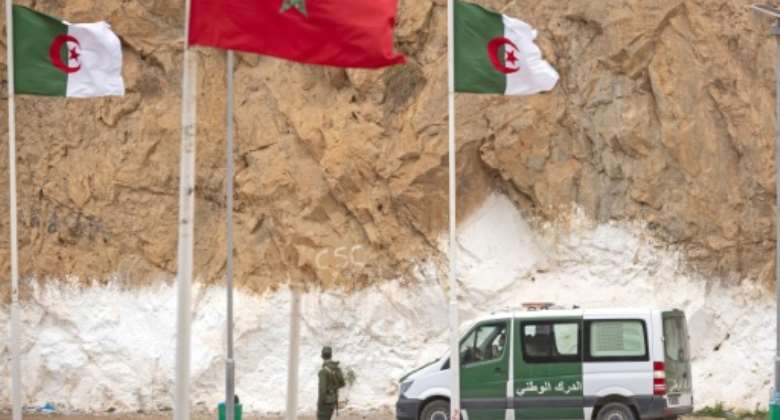 Closed since 1994, the border between Algeria and Morocco has been tightly sealed since 2013 ending visits between the many families that straddle the frontier. By FADEL SENNA (AFP/File)

Fatima Chaaoufi gazes across the sealed Moroccan border towards an Algerian village on the other side, home to family members she hasn't seen for years.

Chaaoufi's village of Oulad Bouarfa, east of the Moroccan city of Oujda, lies just a stone's throw from Boussfar, the Algerian village where her brother died a month ago.

Chaaoufi had not been able to see him since 1994, when the border was closed following a diplomatic crisis between the North African rivals.

"When I found out he had died, I couldn't control myself," she said, tears in her eyes. "I ran to the barbed wire. They tried to hold me back but (my grief) was stronger than me."

The 75-year-old, sitting in the yard of her family's modest farm wearing a hijab on her head and an apron around her waist, said she had been forced to watch the funeral procession from a distance, "impotent and in tears".

Chaaoufi's is just one of many families divided by a frontier that Algeria closed in 1994 after Morocco accused its neighbour of involvement in a jihadist attack on a Marrakesh hotel that killed two tourists.

The frontier has been sealed ever since, and there is little prospect of it opening soon as tensions mount once again between Rabat and Algiers.

In August, after months of growing frictions over the Western Sahara and Morocco's normalisation of ties with Israel, Algeria cut diplomatic relations with its neighbour, citing "hostile actions".

Then last week, things took a turn for the worse as Algeria accused Morocco of killing three Algerian civilians on a desert highway through an area of the disputed Western Sahara controlled by the Algerian-backed Polisario Front independence movement.

The sealing of the border also ended the smuggling on which many families depended to get by, triggering widespread unemployment. By FADEL SENNA (AFP/File)

But despite the bitter rivalry between their governments, Algerians and Moroccans have deep cultural and family ties.

"It's so sad to see two brotherly people separated by political decisions," said Bachir Chaouch, who was born in 1951 across the border in El Amria but moved to Morocco before Algeria won independence from France in 1962.

Today, he has lost all contact with his uncles, aunts and cousins who stayed in Algeria.

"Until 1994, it was different. We used to go and see our families, business was good. We never thought we'd get to this point," he said.

Despite being officially closed, the border remained relatively porous as smugglers carried on a thriving trade in petrol and cheap manufactured goods -- as well as more illicit items.

But in 2013, the Algerian authorities launched what they said was a crackdown on the drug trade, stepping up patrols and digging trenches along the frontier, which prompted Rabat to erect border fences.

Technically, Algerians and Moroccans can fly between each others' countries, but for farming communities along the border, cut off from what could be a key export market, that is little comfort.

"It was a good time. We worked on both sides of the border, bringing in fuel from Algeria and selling clothes over there," said resident Mohamed Haddouri.

"Today we get by raising animals, but it's not enough to feed my kids. Our future looks tough."

Many residents of border communities want to see the frontier reopen but an esclating war of words between the two governments makes that an increasingly distant prospect. By FADEL SENNA (AFP/File)

Haddouri said virtually everyone in this part of Morocco has family in Algeria.

The two areas have historic links, and late Algerian president Abdelaziz Bouteflika was born in Oujda when both countries were under French rule.

Meriem Hamouyi, a fellow villager with henna patterns on her hands, agreed.

The closing of the border was "a bitter blow for us. All four of my kids are unemployed," she said.

Oualid Kebir, an Algerian who has lived in Oujda for 10 years, says virtually everyone in the city has family across the border.

"Likewise on the other side," the businessman added. "It's a big mistake to maintain these divisions."

Kebir, a political activist who regularly posts on YouTube, said it was "a psychological ordeal" being far from his family.

"I still believe in better relations between the two countries," he said.

COVID-19: Our responsibility to one another is to get vaccin...
43 minutes ago

Bawku disturbance: Cooperate with government to ensure peace...
51 minutes ago