Your Excellency, can Ghana boast of good roads? 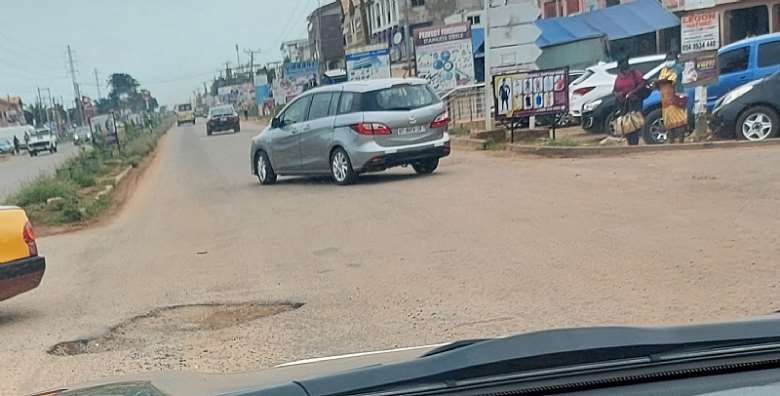 "Please, we are losing her. Can you call the Ambulance to transport her to the hospital? Our Toyota Vitz is stuck in this mud and we need to urgently resort to an ambulance to safe a life". This has been the plea of some Ghanaians who could only afford a saloon car due to the global economic hardship. Their only crime is that they find themselves in a country where bad roads had succeeded in claiming lives of expectant Mothers, accident victims and the aged over the years. My family had to sometimes fast and pray during a number of long journeys across the length and breadth of the country for reasons known best to us. Chances are that, you will return in pieces in the event where you survive or you might end up losing your life. I cherish and honour people at the helm of affairs because no country can see development without them. However, our case is different compared to the Western countries. This negligence continues to wreak havoc due to the extent to which we attach politics to everything we do as a country. With some dishonest politicians making every effort to acquire wealth for themselves at the expense of ensuring that the lives of the citizenry are protected, there is absolutely little we can do. Besides, when the reader of this all important piece gets the opportunity to manage the affairs of this country, it is very likely he may engage in the same corruption he is thinking about now. Imagine, using counterfeit to purchase weed; the buyer and the seller are all at fault and must be made to face the full rigours of the law.

This article of mine isn’t backed by an ill – motivated agenda to remind you of your loved one who might have been snatched by this demon called accident courtesy bad roads. Instead, I am just putting this to the fore in anticipation that the President's attention would be drawn to the numerous lives gone a begging and continue to go because of bad roads. Truth is in an attempt to dodge a pothole, some drivers end up involving in a head on collusion with other oncoming cars. A situation that could have been avoided if the roads were good. At this point in time, some people will apportion blame using their political lenses. The likes of Kwame Owusu Ansah, Suzzy Williams, Terry Bomchaka and Ebony Reigns met their untimely death through accident. Some of which were as a result of bad roads.

It will interest you to know that Ghana can no longer boast of good roads apart from the few ones we have. Just last week as I drove to Kwahu on the Accra – Kumasi Highway, I realised there are no more potholes but holes which could be likened to a building foundation. From the New Jejeti township to Nkawkaw were dangerous holes. To my surprise, a saloon car in an attempt to dodge one of those building foundations, veered off, somersaulted and injured all five passengers on board. Let me be quick to indicate my little observation during this vacation.

In the first place, 16 Junction, located on the Vivian Farms – Sakumono-Estate Junction stretch can boast of a manhole. It’s been like that for the past couple of months and it hasn’t occurred to leadership to find a lasting solution to it. As if that wasn’t enough, on the same stretch, the first and second traffic lights can equally boast of similar holes which continue to cause unnecessary traffic on the road. I won’t even speak on holes on the Nungua- Barrier, Ashaiman Zenu - Lebanon, Nyankomasi Ahenkro – Fosu, Oda – Ofoase Ayirebi, Dawhenya – Ada roads among others. Authorities ply these roads every morning but are blind to the reality on the ground. I know they are waiting for an accident to occur in order to set a 10member Committee to investigate and bring their findings to the Road Minister.

Another point worth mentioning is that, the numerous holes on our Highway are as a result of shoddy work on the part of some contractors. Indeed, it is alleged that in Ghana, everything centres around the usual whom you know. I doubted all this while, until I met a five year old boy at an eye screening centre yesterday. He said “mom says it is too long a queue so play as though the old man is behind you". I was surprised to hear such a weightier arrangement from a chap of his calibre. Road Contracts are allegedly awarded to friends and cronies and just like the case of the little boy, there is always an arrangement.

Mr. President, at this juncture, with the greatest of respect, can we boast of good roads as a nation with regard to the aforementioned observations? If the answer to this simple question is a no then I humbly ask that you make a distress call to the Road Minister to embark on a nationwide tour. Besides, he might not be privy to the current development regarding bad roads and its associated dangers. This, I believe will go a long way to better inform him on the situation on the ground. Who knows? He may not be aware. Your Excellency, for the sake of your name, please, expedite matters in fixing bad roads in Ghana. We shouldn’t politicise road construction. Besides, the pothole doesn’t know NDC or NPP vehicles. Indeed, when pothole succeeds in claiming a life or two, it doesn’t ask whether or not the victim voted for NDC or NPP. Ghana must rise against over politicisation of issues of national interest. Dr. Kwame Nkrumah is remembered for his numerous impacts in terms of infrastructural development. What will our current crop of leaders be remembered for? The ordinary Ghanaian cannot be flown abroad when he suffers multiple fractures owing to accident. Let’s think about the people who gave as the power to rule.