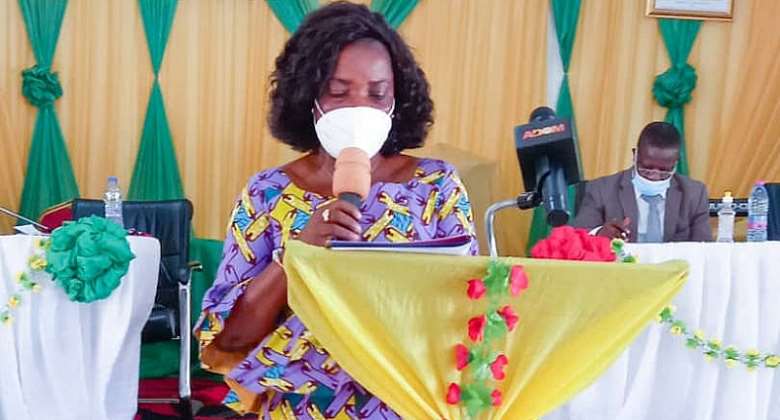 The District Chief Executive Hon. Faustina Amissah made this known in her report to the General Assembly on Tuesday, 19th October, 2021.

She indicated that the Assembly is committed to resourcing the Town Councils especially with motorbikes and other logistics to enable them deliver on their mandate. Hon. Amissah therefore charged the members to work hard towards the realization of the aspirations and needs of the people of Obuasi East.

She emphasized that their collective responsibility would be to work hard to deepen local government and help better the livelihoods of the people.

She also lifted the lid on recommendations by the District Inter-Agency Coordinating Committee on Sanitation, tasked to ensure that the foods consumed by the people are wholesome and of good quality. She said the Committee has resolved that no vehicle should transfer food products until the vehicles are registered with the Environmental Health and Sanitation Unit of the Assembly.

Again, no human is allowed to transport food and beverages in the product storage vehicles compartment

It has also resolved that all meat products should be packaged in polythene bags before being loaded into an approved van.

Honourable Faustina Amissah said the Assembly will strictly enforce these directives with punitive measures instituted to deal with those who will flout the directives.

The Obuasi Municipal Police Commander who also has jurisdictional responsibility of the Obuasi East District, DSP Martin Assenso assured Assembly members and residents of the District that the Police is working hard to maintain the existing peace in the District.

Given the crime situation in the District, he said apart from few murder cases reported which mostly involved people with mental issues, the District was relatively calm. He said suspects in the murder cases have been arrested and have been processed for court.

On health-related issues, Madam Delphine Gborgblorvor, the District Director of Health said the COVID-19 pandemic is still around. Giving account on COVID-19 situation in the District, she said out of the 1,829 samples taken, 474 proved positive with 14 deaths so far. She added that currently there is one (1) active case in the District.

She revealed that the District was allocated 55,231 vaccines but only 14,195 and 8,359 people have taken the first and second dose respectively. As a result of this, she said her office has decided to go to market centers to vaccinate people.

He called on Assembly members to join the campaign to sensitize the people to go for the vaccination.

The meeting was chaired by Hon. Jeff Kwadwo Adjei Oware, the Presiding member and had Assembly members, Mr. Eric Aboagye-Mensah the District Coordinating Director, Heads of Department and the media.