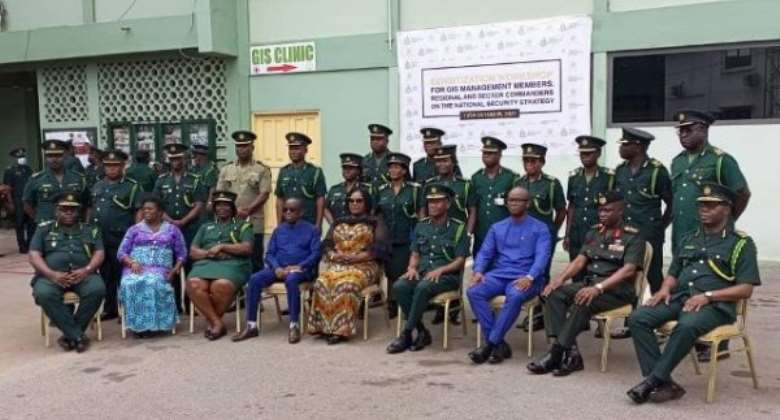 Recent happenings across the globe point to the need for the intelligence and security communities to work together as the threat to safety and peace is becoming more sophisticated.

The Comptroller-General of Ghana Immigration Service, Mr Kwame Asuah Takyi, who said this at a day's workshop on the National Security Strategy, noted that,” It is in our shared effort in fighting crime of all forms at all fronts that we can win the war against cross border crimes, terrorism, extremism and other violent crimes that will inhibit the steady economic growth of our country.”

The workshop was organised for members of the National Immigration Management Committee and Regional Commanders to sensitise them on the Strategy.

The Comptroller-General said the old turf war amongst the security agencies, especially between the GIS and the Customs Division of the Ghana Revenue Authority had gradually given way to a nationalistic approach to border management.

“I must say that this collaboration has paid off leading to the interceptions of thousands of slabs of marijuana, vehicles, petroleum products, fertilizers, illegal migrants just to mention a few. Currently at the Northern Frontier of our borders there is a collaboration of the security agencies, including; the Ghana Army to prevent the overflow of terrorism from our Northern neighbour into Ghana,” he added.

He said the effective collaboration had helped to inspire confidence in the citizens in that part of the country and led to an environment of peace and safety for the people to go about their economic activities.

Mr Ambrose Dery, the Minister of the Interior, in a speech read on his behalf, said, security had become the key for national survival and “all the other facets of the country depend on how secured the country is for the economy to blossom and the people feeling secured and safe.”

He said the dynamics of providing security had changed from an era where the men in uniform were charged with the responsibility of safeguarding the security of the State alone.

“Today security has become a shared responsibility with the citizenry effectively collaborating with the security agencies,” he noted.

He said authorities were aware of challenges confronting the Service, saying, “A year ago, during my tour of some various border posts along Ghana's Northern frontier, I fully appreciated the frustration of some Immigration Officers owing from a lack of equipment and logistics that render them incapable of manning approved and known unapproved routes.”

The Minister said the launch and the implementation of the National Security Strategy would, therefore, addressed those challenges.

“The Strategy will usher in a dawn of a new era, where the Ghana Immigration Service would be adequately resourced and fully equipped to manage Ghana's land borders…,” he said.