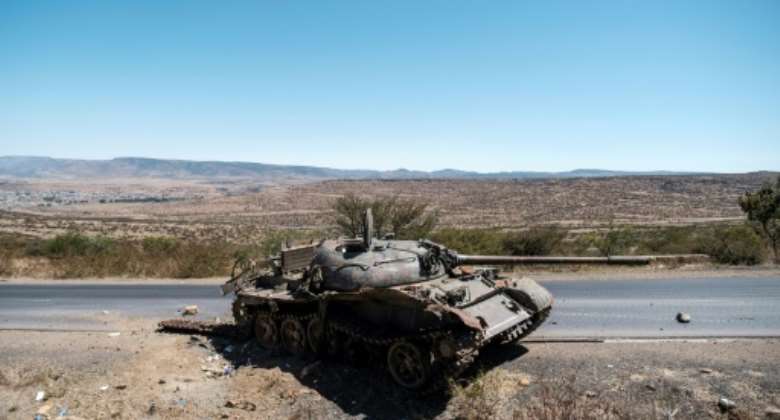 Conflict has been raging in northern Ethiopia since November 2020. By EDUARDO SOTERAS (AFP/File)

Ethiopia's military launched air strikes on the capital of the war-battered Tigray region on Monday that a hospital official said had killed at least three people, including children.

The government had initially dismissed reports about the bombardments on Mekele as an "absolute lie" but state media later confirmed the air force had struck Tigray People's Liberation Front (TPLF) targets.

They were the first air raids on Mekele since the early stages of the almost year-long war in northern Ethiopia that has killed untold numbers of people and triggered a deep humanitarian crisis.

The bombardments -- reported by residents, humanitarian officials and diplomats -- came as the government of Prime Minister Abiy Ahmed appeared to be pressing a new offensive against the TPLF.

The Ethiopian Press Agency said the raids hit media and communications equipment used by the TPLF, adding that "measures to prevent civilian casualties during the air strikes were done successfully".

The United Nations voiced deep concern about the impact of the raids on civilians and the escalation of a conflict it says has driven hundreds of thousands into famine-like conditions.

The sources told AFP the first strike occurred near a cement factory on the outskirts of Mekele, the city held by the TPLF since it was recaptured from government forces in June.

The second strike hit the city centre near the Planet Hotel, often used by top officials from the TPLF, the region's former ruling party and the target of a government military operation since November.

A government spokesman had earlier branded the reports of as lies concocted by the TPLF "to misguide the international community" and apply pressure on Ethiopia.

"There is no reason, or no plan, to strike civilians in Mekele, which is a part of Ethiopia, and home to our own citizens. This is absolute lie," Legesse Tulu, head of the Government Communication Service, told AFP.

Dr Hayelom Kebede, research director at Mekele's Ayder Referral Hospital, told AFP that "many casualties" were coming to the facility and that three people -- including two children -- had been killed.

Map showing the Tigray region of Ethiopia. By (AFP/File)

The TPLF said government forces were "losing big" and the aerial assaults were designed to inflict civilian casualties as revenge.

"Monday is market day in Mekele & the intention is all too palpable," TPLF spokesman Getachew Reda said on Twitter.

Ethiopia's foreign ministry accused the TPLF of trying to cover up alleged attacks on civilians in Amhara and Afar, the regions neighbouring Tigray where the fighting has spread.

"The TPLF has been crying wolf in the past week, calling on the international community to save it from the 'planned' government attack against it," it said.

The United Nations said it was looking into the "alarming" reports of the air raids, with chief Antonio Guterres urging all sides to avoid targeting civilians and again calling for a halt to all hostilities.

"The secretary general is deeply concerned over the escalation of the conflict in the northern Ethiopia as illustrated by the air strikes in Mekele today," his spokesman Stephane Dujarric told reporters.

Since the fighting first erupted in Tigray, nearly two million people have been displaced, and there have been many reports of atrocities including massacres and mass rape.

The war has also soured relations between Ethiopia and Western powers, including the United States, long a crucial ally.

The latest tit-for-tat accusations between the warring parties came as the TPLF appeared to move south of Tigray towards Dessie, a city in Amhara where tens of thousands have sought refuge from the rebel advance since July.

Ethiopian Prime Minister Abiy Ahmed was sworn in for a five-year term earlier this month. By Amanuel Sileshi (AFP/File)

One resident told AFP that Dessie was "flooded" with displaced civilians arriving from Wuchale, which lies to the north.

Legesse said the TPLF had in recent days used heavy weaponry on Wuchale, and accused the rebels of killing more than 30 civilians there.

At the weekend, Getachew said rebels had taken Wuchale -- a claim denied by a military official in Amhara.

Getachew said the rebels would march all the way to Addis Ababa if necessary.

"If that's what it takes to break the siege on Tigray, why not?" he told AFP by text message.

The rebels have justified their push into Afar and Amhara as necessary to prevent government forces from regrouping and to break what it describes as a humanitarian siege of Tigray.

The conflict erupted in November after Abiy sent troops to Tigray to topple the TPLF, which dominated national politics before he took office in 2018.

The 2019 Nobel Peace laureate -- who was sworn into a new term in office just two weeks ago -- said the deployment came in response to TPLF attacks on army camps.