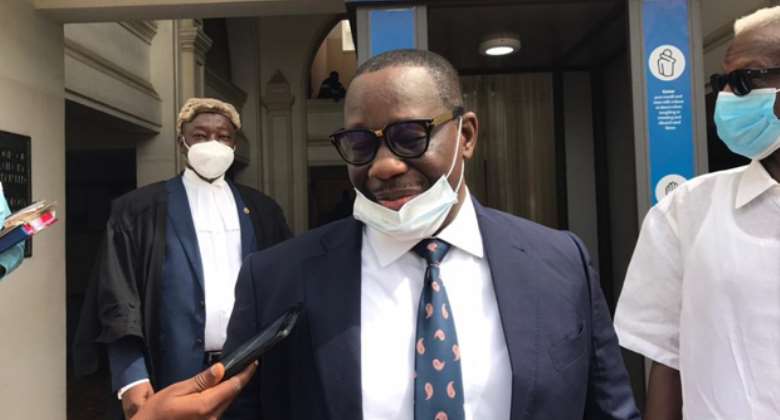 An Accra High Court hearing the case of Mr Ernest Thompson, former Director General of the Social Security and National insurance Trust (SSNIT) and four others has granted an application of the state to amend count 11 and 12 of the charge sheet.

It has therefore ordered prosecution led by Marina Appiah Opare, Chief State Attorney to file the amended charge sheet on or before October 19, this year.

The court presided over by Mr. Justice Henry Kwofie, a Court of Appeal Judge sitting with additional responsibility as a High Court Judge, ruled that he was minded to grant the application after taking a look at count 11 and 12 and the discussions by defense Counsels made before him (Court) today (Friday).

The matter has been adjourned to October 29.

Earlier Annis Moghtar Mohayideen, who represented Mensah, said he had just been served in court with the amended charge sheet and same differed with regards to the mode prosecution was taking.

Mr. Mohayideen was of the view that the state should have withdrawn the old charge sheet and amend same entirely, adding that, the amendment should not be done in pieces.

Mr. Ashia said what he knew was that it was when the court had granted that the application for amendment that the state could go ahead and file same.

In his view, Paa Kwasi Abaido who represented Afaglo, said from practice the intended amended charge sheet should remain unsigned until same was covered by an order of the court.

Mr. Hayibor who represented himself, informed the trial judge that he received the motion for amendment of the charge sheet on Thursday and he had nothing useful to add to same.

The five accused persons are being tried over the $66million SSNIT Operational Business Suite (OBS project), which was meant to revamp the operations of SSNIT through Information Communications Technology.

Thompson and Kramer were jointly held over three counts of contravening the Public Procurement Act, 2003 (Act 663).

Afaglo and Kramer are also facing a charge of defrauding by false pretences.

Afaglo has been accused again for securing his employment at SSNIT with fake Certificates and he also said to have possessed forged documents and uttering the said forged certificates.

Immediately withdraw your directive to Goil; it's dangerous ...
22 minutes ago