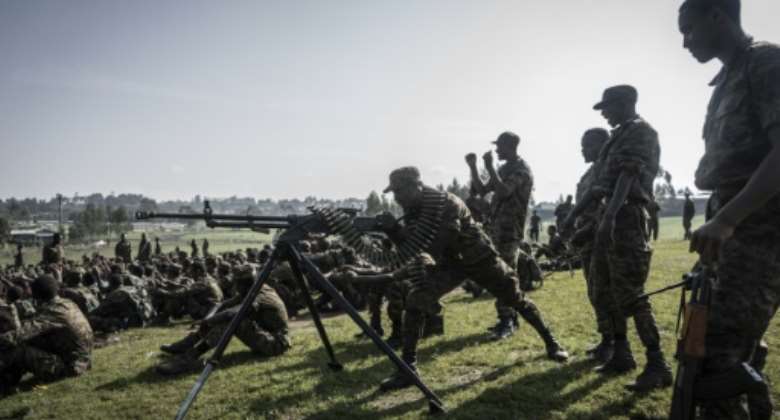 Ethiopian troops and their allies are launching air and ground strikes against Tigray rebels in the northern region of Amhara, humanitarian and rebel sources told AFP, amid growing speculation of a major offensive.

A spokesman for the Tigray People's Liberation Front (TPLF), which has been locked in a brutal conflict with pro-government forces in northern Ethiopia for 11 months, said Saturday there was a "massive move" against the rebels.

The reports come just days after Prime Minister Abiy Ahmed was sworn in for a new term, vowing to defend "Ethiopia's honour" despite mounting international criticism of the war and alarm about the desperate humanitarian crisis it has triggered.

TPLF spokesman Getachew Reda said there had been "mostly air, drone and artillery bombardment" of rebels, and reported a major troop build-up, saying "tens of thousands are amassed" in northern Amhara including the North Gondar and North Wollo zones.

"We are confident we will thwart the offensive in all fronts and more," he said. "We will stand our ground until the siege is lifted."

Humanitarian sources had told AFP that federal soldiers and Amhara regional troops conducted air and ground offensives in the North Wollo area and other locations on Thursday and Friday.

Representatives from Amhara, as well as federal and military officials, did not respond to requests for comment and the reported military operations could not be independently confirmed by AFP.

The war erupted in November when Abiy sent troops into Tigray to topple the TPLF, the regional ruling party and former national rulers, a move he said came in response to TPLF attacks on federal army camps.

Although government forces quickly took control of Tigray's cities and towns, the TPLF recaptured most of the region including the capital Mekele by late June and Abiy later declared a unilateral ceasefire.

But fighting, which has since spread to neighbouring Amhara and Afar, has created what the UN calls an "immense humanitarian crisis" with hundreds of thousands of people driven into famine-like conditions.

The US has threatened sanctions against the warring parties if they fail to commit to a negotiated settlement to end a conflict that threatens to destabilise Africa's second most populous nation.

The former chief of staff in the Abiy-appointed Tigray interim adminstration told AFP Saturday that federal officials had long resisted their entreaties to pursue talks, after TPLF forces had initially been driven out of Tigray.

"They rejected that. They said 'Already the TPLF army is completely destroyed,' and they said, 'With whom we are going to negotiate?'" said Gebremeskel Kassa, an outspoken critic of Eritrean forces fighting alongside Ethiopian soldiers in the region.

Gebremeskel, who fled Tigray in June, said he had now left the country fearing for his safety and was seeking asylum abroad.

There has been speculation the fighting could pick up now the rainy season is ending, and with mass mobilisation throughout the country and in Amhara in particular.

Abiy Ahmed was sworn in for a new term as prime minister of Ethiopia on Monday. By EDUARDO SOTERAS (AFP/File)

On Thursday, the Amhara region's spokesman said on Twitter: "Since an operation to free our people who are in trouble because of the terrorist TPLF could be conducted at any time, in all fronts, we all have to be vigilant 24 hours a day."

Awet Weldemichael, a Horn of Africa security expert at Queen's University in Canada, said earlier this week that Abiy's new government would have to grapple with "a trifecta of crises" -- the war itself and its humanitarian and economic fallout.

"The upcoming wave of fighting and worsening humanitarian conditions are a further hit on his international standing and a test to his new government from day one."

Abiy's government sparked global outrage last week when it expelled senior UN officials from Ethiopia for "meddling" in its affairs, exacerbating concerns about the humanitarian crisis.

UN chief Antonio Guterres, who has said more than five million people were in need of assistance, on Wednesday urged the Ethiopian authorities to allow the UN to deliver aid "without hindrance".

Tigray is under a de facto blockade that is preventing most aid from reaching the needy. By Yasuyoshi CHIBA (AFP/File)

Tigray is under a de facto blockade that is preventing most aid from getting in. Ethiopian officials blame the TPLF for obstructing deliveries, but the US has said access to essential supplies and services was being denied by the Ethiopian government.

The UN's humanitarian agency OCHA in recent days warned that a lack of medical supplies was also having fatal consequences in Tigray and reported alarming levels of malnutrition among children and pregnant women.