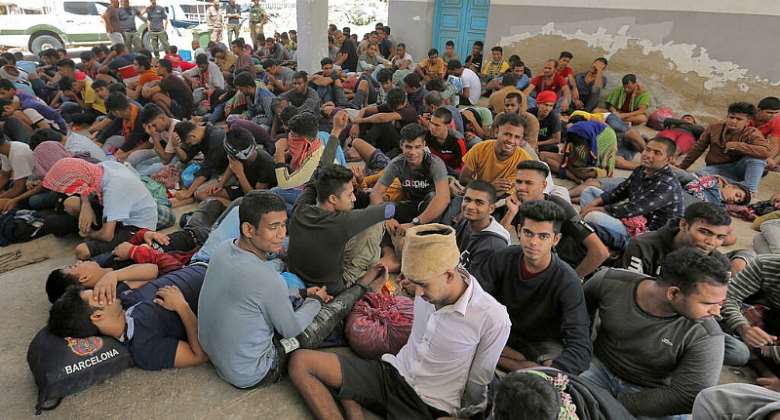 A UN report by human rights investigators in Libya details a number of possible war crimes and crimes against humanity against detainees and migrants in Libyan prisons. The investigators said that they now have a confidential list of suspects.

"The investigations indicated that several parties to the conflicts violated [international humanitarian law] and potentially committed war crimes," according to the fact-finding mission, led by Mohamed Auajjar.

From Russia with murder
The report pointedly accused mercenaries employed by Wagner, a Russian security company, of shooting prisoners in September 2019.

"There are thus reasonable grounds to believe that Wagner personnel may have committed the war crime of murder," it said.

The investigators also found a computer tablet used by Wagner that was left behind, detailing where land mines were planted in 35 different places near civilian buildings.

These mainly Russian-made mines had been maiming civilians since June 2020, when a number of people returned to their homes, according to the report.

European Union accusations
The European Union has been accused of complicity in crimes carried out by militias and others after it signed a migrant deal with Libya in February 2017. This deal outlines assistance to the Libyan Coast Guard to intercept people in international waters and return them to Libya and detention centers.

"It is quite clear that the [European Union] pushback policies at sea have led to huge violations of human rights...of migrants, leading to detention in Libya upon return," said panel member Chaloka Beyani.

Worst perpetrator
Some of the worst abuses, according to the UN investigators, were allegedly carried out by Mohammed al-Kani, a commander who the report said was killed in July during a raid by the eastern-based Libyan National Army (LNA).

He reportedly orchestrated killings carried out by an armed group in the town of Tarhouna with victims buried in mass graves.

There has been no confirmation regarding his killing from Libyan authorities.

Libya has been in a state of unrest since 2011, when a number of armed groups who rose up against Libyan strongman Moamer Khadafi have been fighting it out for power, weapons, and control and traffic of migrants there.

The various factions have been supported by a number of countries, with Russia, Egypt and the United Arab Emirates backing eastern forces, while Turkey supporting the government in the west.

Combat has ceased since 2020 when a ceasefire was declared with elections slated for December.

On Sunday, the Libyan foreign ministry said that some foreign fighters had left the country, adding that the unity government is asking for international help to push for the rest to withdraw.

'We will stand united to oppose e-levy' – Haruna Iddrisu but...
7 minutes ago