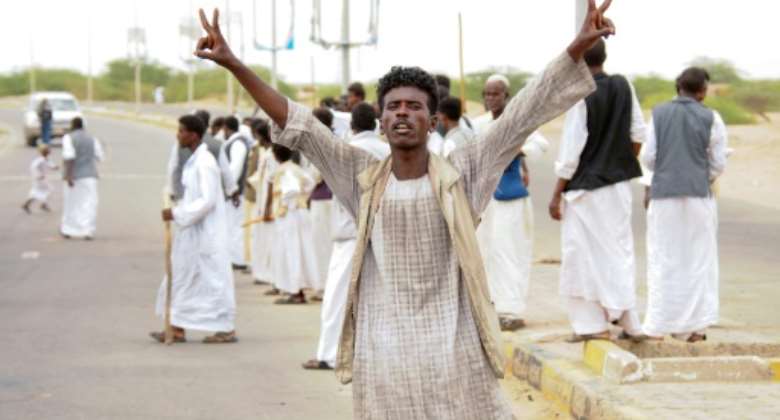 A protester flashes victory signs following the arrival in Port Sudan of a delegation led by a member of Sudan's ruling Sovereign Council on September 26, 2021. By Ibrahim ISHAQ (AFP)

Oil exports from South Sudan can resume unimpeded through a Sudanese port, Khartoum's ruling council said late Sunday after it reached an agreement with protest leaders in the country's east.

Khartoum earns revenue for its impoverished economy from the South's oil exports, and the deal came hours after senior government officials flew to Port Sudan, the Red Sea trade hub.

"The joint meeting between the government delegation headed by General Kabashi, a member of the Sovereign Council, and a delegation from the Beja council reached an agreement on allowing the passage of South Sudanese oil exports through the Bashayer port," Khartoum's ruling sovereign council said in a statement late Sunday.

Bashayer is the main terminal, close to Port Sudan, from which landlocked South Sudan's oil supplies are shipped to global markets.

Oil Minister Gadein Ali Obeid had warned Saturday of "an extremely grave situation" with two pipelines blocked by the protesters.

They put forward proposals to eventually open all ports and roads leading to the city which protesters began blocking early last week.

The Beja tribe elders tentatively agreed and said they would need a week to further discuss the initiatives, the statement added.

The breakthrough came after Information Minister Hamza Baloul confirmed to AFP earlier on Sunday the delegation's arrival while another senior official, who preferred to remain anonymous, said "the delegation won't come back (to the capital Khartoum) before solving the crisis".

Neighbouring South Sudan produces around 162,000 barrels of oil per day, which are transported by pipeline to Port Sudan and then exported.

Speaking in Khartoum on Sunday, Sovereign Council chief Abdel Fattah al-Burhan described the protesters' demands as "a political matter that must be dealt with politically".