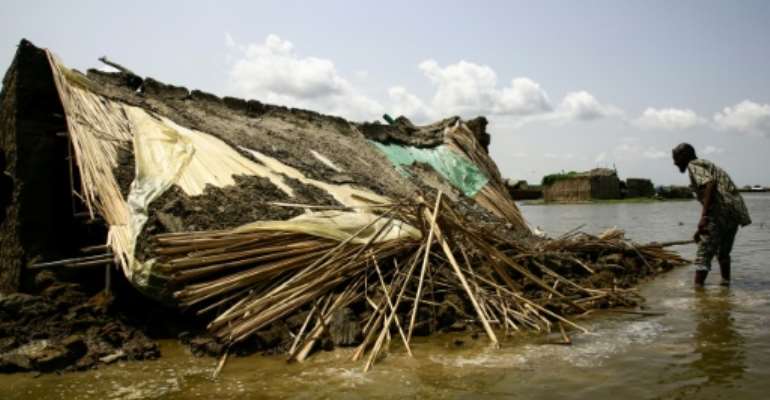 South Sudanese refugee Dawood Kour fled to Sudan to turn the page on a life of displacement, only to be forced onto the streets once more after floodwaters submerged his rickety shelter.

Kour crossed the border in November, fleeing years of conflict in his home city of Malakal -- itself prone to flooding.

South Sudan became the world's newest independent nation in 2011, seceding from Sudan. But in late 2013, it plunged into a devastating, five-year civil war that it has yet to fully recover from.

Since fleeing, Kour had lived in the Al-Qanaa camp, a growing community of around 35,000 refugees in the Al-Jabalain district of White Nile state.

But this month, Kour was displaced yet again as floodwaters inundated the camp. He moved to the nearest patch of dry land he could find -- the roadside.

The waters rose so fast that "we had no time to collect our belongings," Kour told AFP. "We only carried our children."

"We now have no food, medication or anything to fight the swarms of mosquitoes."

Over 288,000 residents and refugees have been affected in Sudan where heavy rains and flash floods have hit 13 of the 18 states, according to the United Nations.

Humanitarian needs have swelled, and been exacerbated by the disaster in neighbouring South Sudan too, where the deluge has affected and displaced about 426,000 people, the UN said.

Over 288,000 residents and refugees have been affected by the heavy rains and flash floods in Sudan. By ASHRAF SHAZLY (AFP/File)

In Sudan, thousands of refugees were relocated to different camps, while others took shelter in villages that were spared, but many are now living on the streets.

"We are facing a serious challenge of finding new land to relocate them to."

The downpours often leave the country grappling with severe flooding that wrecks properties, infrastructure and crops.

Authorities say the floods have damaged or destroyed around 35,000 homes. By ASHRAF SHAZLY (AFP)

Last year, Sudan declared a three-month state of emergency as flooding that the UN has called the country's worst in a century left around 140 people dead and 900,000 affected.

So far this year, the floods have killed more than 80 people nationwide and damaged or destroyed around 35,000 homes, according to Sudanese authorities.

In the Al-Jabalain district, neither Sudanese villagers nor the refugees were prepared for the inundation.

"Villagers say they have not witnessed such floods in 40 years," said Anwar Abushura, the head of Al-Qanaa camp.

Aid workers have warned of a looming outbreak of water-borne diseases among the doubly displaced refugees. By ASHRAF SHAZLY (AFP/File)

"But the water arrived at such a fast pace, and the flood barrier collapsed within two days," he said.

Many refugees had to make their way through the stagnant floodwater to salvage building materials and belongings from the collapsed shelters.

"We have no food or even rugs to sleep on," said refugee David Bedi, 45, whose shelter was engulfed.

"We just want to build roofs over our children's heads."

Aid workers have warned of a looming outbreak of diseases among the doubly displaced refugees.

AFP saw some people bathing in the floodwater and using it to fill drinking containers.

Around 150 refugees from Al-Qanaa and the nearby Al-Alagaya camp, including children, were diagnosed with malaria on Monday, according to figures compiled by Sudan's refugee commission.

Darquos Manuel, 32, said food had been spoilt, "mosquitoes are eating the children and the rains continue to pour down even as we live on the streets".

"There is little chance for survival under these conditions," he said.

At Al-Alagaya camp, where many refugees were relocated, Nagwa James pointed to shelters that had buckled under the relentless torrents of water.

Neither Sudanese villagers nor the refugees were prepared for the inundation. By ASHRAF SHAZLY (AFP)

"We fear... we will get flooded the same way Al-Qanaa did," the South Sudanese refugee said.

Conditions were already poor, "mosquitoes are everywhere and there are a lot of infections", she added.

Mohamed Ali Abuselib, head of the camp, said refugees had been moved from low-lying areas.

But most are in the open, he added, "and we are expecting more floods".