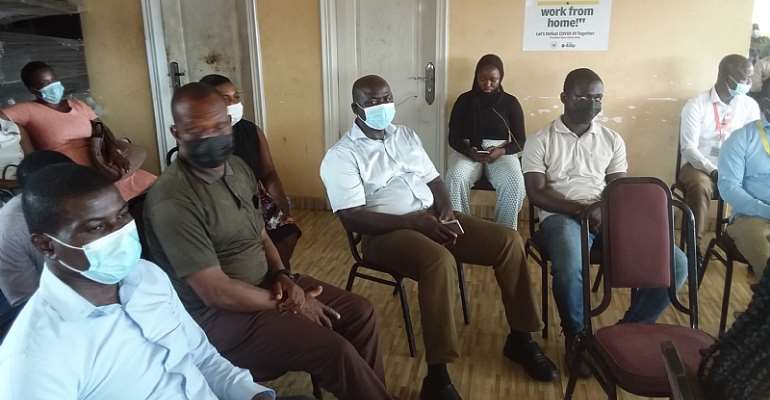 Mr. Biasie disclosed that the Korle Klottey Municipal Assembly currently has an overall population staff of 449, in which 312 are the Internally Generated Fund staff.

The KoKMA Municipal Coordinating Director made the appeal during the occasion of the official working visit paid by the Head of the Office of Local Government Service,Ing. Dr. Nana Ato Arthur to the Assembly on Thursday.

Mr. Biasie mentioned that the Assembly spends a lot each month to pay for the salaries of its IGF staff.

"We spend approximately GHc45,000 each month to cater for our IGF staff," he stated.

He further announced that to help improve and drive staff performances at the office, the Assembly has put up some measures which among other things include incentives to award hardworking staff.

Mr. Emmanuel Biasie also mentioned that as part of the measures put in place, staff shall be sponsored to undertake career based refresher courses to help sharpen their skills and deepen their knowledge of local governance.

The incentives according to him, is to help motivate staff to give out their best, which is also not limited to only Government of Ghana ( GoG) staff but extended to the IGF staff as well.

"All offices of the Assembly is undergoing massive retooling as new computers and their accessories have been procured and installed. No office lacks a computer at the Assembly at the moment," he noted and further assured that the retooling of offices shall continue and hopefully it shall be better next year.

"We have also decided to introduce an Electoral Area Development Fund to ensure all the Areas under the Assembly feel the positive impact of our work. Funds shall be released each quarter to the zonal councils so as to make local structures’ very strong," to that end, Mr. Emmanuel Biasie also announced the establishment of two zonal council offices at Adabraka and Osu.

The KoKMA Municipal Coordinating Director described the visit by the Head of Service as a morale booster that will contribute immensely to the work of the Assembly.

The MCE described the interaction between staff of the Assembly and Head of Service's entourage as the time to re-energise and focus on important things that will help propel the Assembly to the top not only in the Greater Accra but Ghana at large.