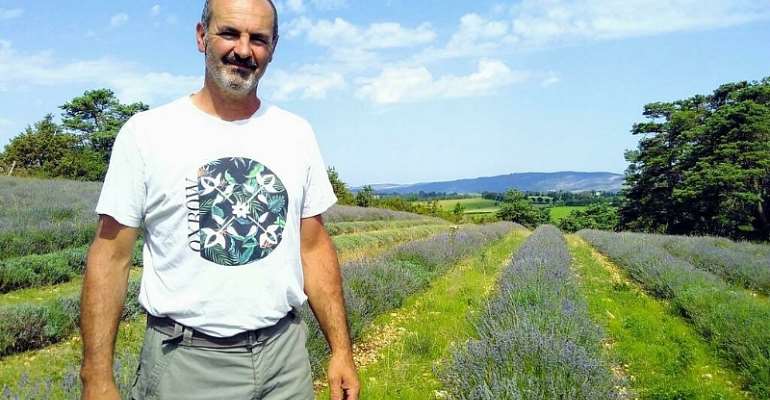 Lavender has been cultivated in France for nearly a century and a half, its production focused in the foothills of the Alps, in Provence. Just like wine, lavender has its 'terroir' - specific soil and weather conditions - which yields high-quality oil. But with climate change and shifting traditions, some are trying to grow the 'blue gold' in other regions, and it's working.

“I sometimes run counter to tradition,” says Laurent Fages. "At one point I was giving horse-back rides, I brew beer. Now it's lavender. I've been known to do things a little differently!”

Fages runs a farm with 200 heads of sheep in the village of Bellas, on the edge of Grand Causses regional natural park. He recently started experimenting with lavender, a plant whose bluish-purple flowers contain oil used in fragrances and cosmetics and to perfume household products.

At the end of July, the field of lavender in bloom stands out from the surrounding craggy boxwood and thistle landscape of the Causses, the limestone plateaus in the Massif Central.

Listen to an audio report with Laurent Fages in the Spotlight on France podcast:

For centuries farmers like Fages have been pasturing sheep on the poor, rocky land of this part of Aveyron, many producing milk for its most famous product, Roquefort cheese.

But Fages has turned three of his fields over to lavender, and now has over ten hectares, planted in rows, a half metre apart, to allow for weeding and harvesting.

Fages had thought about lavender as a young man, when wondering how to stay in the area and work in agriculture.

“I didn't really want to do what everyone else was doing, because I know the pressures of sheep farming,” he says.

“I had thought about lavender, it grows here in the wild. When I was younger and watching over the sheep, I'd sometimes pick a bouquet.”

In 1995 Fages took over his parents' sheep farm and dropped the idea of growing lavender. But a family holiday in Ardeche near Provence five years ago rekindled his interest.

“There were lavender fields around, and it struck me that this landscape really looked like what we have in the Causses,” he says.

On a tour of a lavender museum, he asked the guide if lavender could grow in the Causses.

“He said, 'Yes, no problem' and asked me if I'd seen it growing there. When I told him it grew on the edges of the fields he said that my the ideal terrain for lavender."

That evening Fages went online and looked up lavender cultivation, and within six months he had completed training courses, bought seeds, and had panted his first field of lavender.

Lavender in Provence, a recent history

About 1,500 people in France grow lavender, and its hybrid cousin, lavandin, in the Drome, Vaucluse and Alps, more broadly known as up Provence.

It covers about 25,000 hectares, in areas that are above 600 metres in altitude, with hot summers, cold winters and well-drained, rocky soil.

Provence has become the plant's traditional terroir, but intense cultivation there only dates back to the early20th century.

The plant may have originated in Persia, and there are historical traces of lavender being used in France in the Middle Ages to treat infectious diseases.

In the 18th century lavender was used against the plague, but the plant was only picked wild.

Its large-scale cultivation came about with the development of the perfume industry around the city of Grasse in the hills above the French Riviera.

Growing what was considered “blue gold” was a way of using otherwise impoverished soil, much like farmers used sheep in Aveyron.

By the mid-20th century, the development of mechanical harvesters made it possible to ramp up production, and concentrated lavender even more in Provence.

Aveyron may not know as much as Provence about growing and harvesting lavender, but Fages is using something he does know well: sheep.

Lavender fields need to be weeded to rid them of plants that compete for sunlight and nutrients.

Fages farms organically and instead of using herbicides puts about 40 sheep in his fields during the spring.

“They eat everything they can. Once in a while they eat some of the lavender plants, but it's not too bad,” he says.

“Between the work they save me, and the loss of income from the flowers they eat, I think the balance tilts in favour of sheep-based weeding!”

So far, Fages' lavender production has been profitable. A distiller two hours north takes all of his production each year.

A few of Fages' neighbours have come to ask for advice, and some have planted their own fields. But even with shifts in production, and growing competition from elsewhere, Provence won't be toppled anytime soon.

A version of this story first appeared in the Spotlight on France podcast. Listen here.

No machinations will break ordained Alan as NPP choice for 2...
56 minutes ago