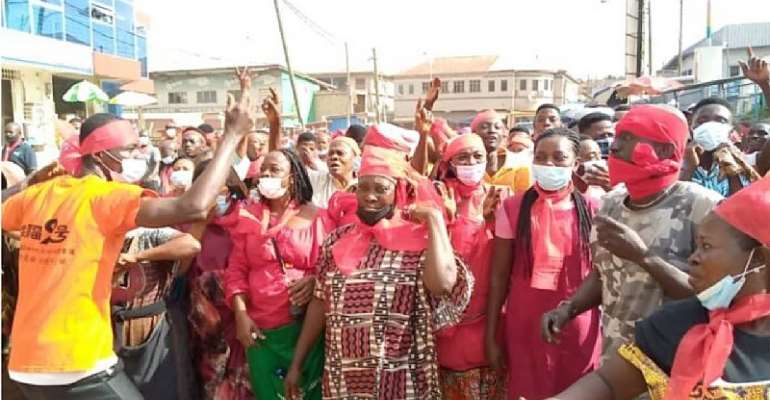 Traders at Kumasi Kejetia are aggrieved with the Ashanti Regional Minister, Mr. Simon Osei Mensah and K.M.A Mayor Osei Asibey Antwi over a notice to evict them from the market.

The Kumasi City authorities and the office of the Ashanti Regional Minister served the traders notice to vacate the place to allow the construction of the 2nd face of the central market reconstruction.

The traders have been given an ultimatum to vacate the premises this Sunday to pave way for the construction.

This, the Kumasi Market Traders Association say authorities should provide an alternative before the evacuation is done.

The notice affected traders at the central market (Bode) consist of yam sellers, fish and meat sellers, vegetable sellers, among others.

The notice sparked the wrath of these traders expressing worry that the evacuation will render them jobless.

At a press conference yesterday, the traders in red and black attire in market accused the minister and the Mayor of ignoring their plight and using force to evacuate them from the central market.

The queen mother of yam sellers at the market, Nana Yaa Oforiwah, addressing the news conference said meetings with the minister and the mayor to address the issue has fallen on deaf ears.

According to her, the force evacuation from the market without plans to relocate them does not augur well.

"Should they not find a better place for us before our evacuation, we will never move an inch from here.

"I must confess that we the traders here at the central market (Bode) are highly disappointed in the regional minister and the K.M.A mayor," she stated.

They however called on the President, Nana Akufo Addo to intervene.