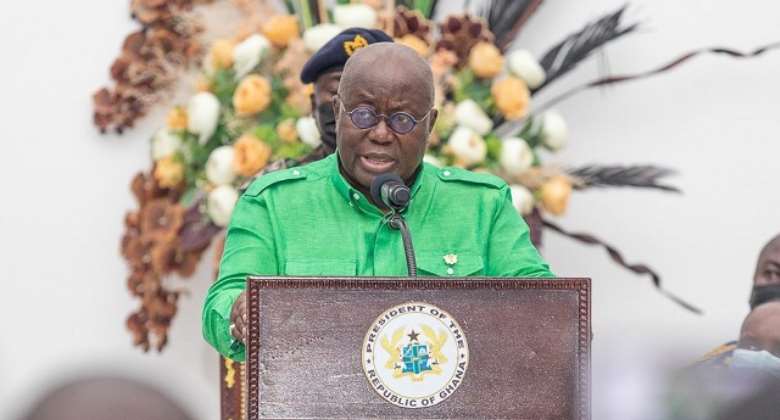 Many interventions to resolve the situation has proved futile. Eni Ghana, for instance, has dragged Ghana to the London Tribunal for attempting to force a wholly-owned Ghana upstream company, Springfield E&P on it.

President Akufo-Addo while responding to a request by the Paramount Chief of Eastern Nzema Traditional Council and President of the Nzemamanle Council, Awulae Amihere Kpanyinli III, to address the issue between the two companies, said he is personally committed to ensuring that the issue is resolved amicably.

President Akufo-Addo said he had had two separate meetings with the parties, all aimed at finding a common ground to deal with the matter without any litigation.

“But I want to assure you that we would continue to discuss and find an amicable solution – therefore let me say that the request by the President of the Nzemamanle Council, Awulae Amihere Kpanyinli III, is a request that sits very well with me and I will be doing my very best to make sure it happens,” he said.

The chiefs welcomed the President's resolve to ensure the resolution of the case.

President's Western Region's tour coincided with the Ellembelle Business Expo, which saw all the oil companies operating in the Western Region and other financial institutions exhibiting their products.

President Akufo-Addo opened a business expo and also took a tour, visiting all the various stands at the Expo, including Eni Ghana and Ghana Gas.

In April 2020, the then Minister of Energy, Mr John Peter Amewu, in accordance with Section 34(1) of the Petroleum (Exploration and Production) Act, 2016 (Act 919), directed ENI and Springfield to execute unitisation with respect to the Sankofa field in the OCTP and Afina discovery in the WCTP contract areas.

Prior to the directive, the minister had been satisfied by a geophysical and geological analysis in March 2018, which showed that the Sankofa Cenomanian Reservoir extended into the WCTP Block 2 contract area.

The situation saw the industry stakeholders calling on the government to encourage the companies to use arm's length dialogue and common-sense approach to resolve the differences between the companies to produce oil from the straddling fields.

The current Minister of Energy, Dr Matthew Opoku Prempeh, earlier this year told the Daily Graphic that until recently, when the parties resorted to the court to resolve certain issues, the government was engaging the parties to speed up the process towards unitisation.

That notwithstanding, the minister said, the ministry was committed to ensuring that the issues were resolved expeditiously to enable the unitisation of the fields for optimum recovery of petroleum from the fields for all parties.

He said the ministry was working hard to ensure that there was optimum recovery of petroleum through activities that conformed with international best practice.

The 30 per cent, appeal & arbitration

In May this year, the Commercial Division of the Accra High Court ordered the operators of the Sankofa Oil Field to preserve 30 per cent of all the revenues which will be accrued from the field until the final determination of a legal dispute relating to it.

Per the order of preservation, the 30 per cent revenue must be paid by the operators, (Eni Limited and Vitol Upstream Limited) into an account agreed by all the contesting parties, which was appealed by Eni Ghana but lost.

Eni Ghana then filed a suit at the International Tribunal in London, United Kingdom, to challenge a directive by Ghana’s Ministry of Energy, asking them to unitise Sankofa offshore oil field and Afina oil block operated by Springfield E&P, a wholly Ghanaian upstream player.