Who Is Obsessed By A National Cathedral? 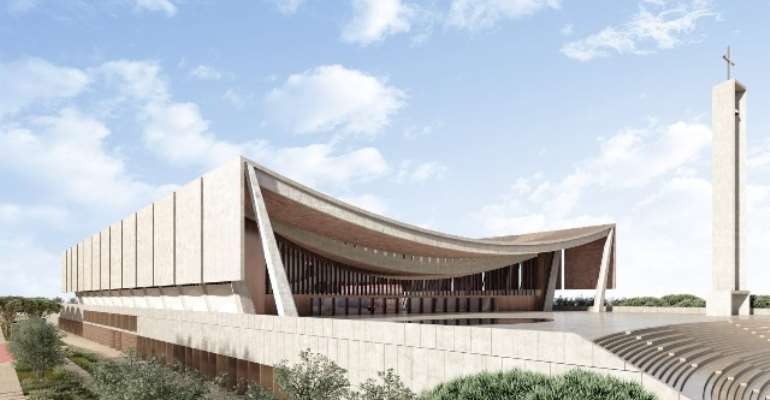 When King David was growing old, he decided to build a temple to house the Ark of the Covenant to honor the Lord God of Israel who had helped him in all the battles that he fought. David was a warrior who led the Israelis in many wars and came back with successes. It was his heart's desire and he wanted to build the edifice before he died. Unfortunately, when he prayed to God to ask for His blessing in building the edifice, God told him that he should not build the temple because his hands were tainted with blood. David had killed so many people at the warfront and God did not want a man whose hands were tainted with blood to build him a temple. The All-Knowing God told David that rather, his son, Solomon, will be the one to build the temple.

When Solomon inherited his father, he also had the desire to build the temple as directed by the Lord of Host. He prayed to God for his blessing and God gave him the go ahead. That was how come the mighty temple in Jerusalem was built. Solomon put everything in the building of the edifice. He led the whole assembly of Israel in prayer, noting that the construction of the temple represented a fulfillment of God's promise to David. He dedicated the temple as a place of prayer and reconciliation for the people of Israel. At the end of the day, the dream of Solomon came into reality. Solomon lived and died a happy man thereafter. Of all the wealth and achievements of Solomon, the temple stood out as the most remarkable one and it became an envy to nations far and near. The Hebrew Bible tells us that the dedication of the temple was concluded with musical celebration and sacrifices which included the slaughter of twenty two thousand bulls and one hundred and twenty thousand sheep. Just imagine!

Here in Africa, one President who will go down in history as the person who also followed the steps of Solomon was the late President of Ivory Coast, Felix Houphouet-Boigny. At a very ripe age, Houphouet-Boigny decided to build a cathedral in honour of the God of Israel. The last time I visited the Ivory Coast, I decided to travel to Yamoussoukro to witness for myself the Notre Dame de la Paix or Our Lady of Peace, built by Houphouet-Boigny, popularly called Le Vieux (The old one). It is a bewildering legacy left behind by the Founding Father of Ivory Coast. I couldn't belief my eyes. I thought I was in Rome and visiting the St. Peters Cathedral. The edifice was so imposing that I returned the following day to the place to have a final look at the cathedral before I left the shores of the Ivory Coast. The Basilica is as tall as St, Peter's. I saw tourists from different parts of the world trooping to have a glimpse of the cathedral. It was a delight to watch. The memory of visiting the Notre Dame de la Paix is still fresh in my mind's eye.

President Akufo Addo's pronouncement that he wanted to build a National Cathedral in Ghana took my eyes back to what I saw in the Ivory Coast. I can't wait to see this cathedral in my life time. History is in the making and I want to be part of the history. When I heard people, especially some Christians kicking against the building of the cathedral, I asked myself: Are these people real Christians? Do they understand what a National Cathedral is? Are we taking politics to the doorsteps of the Lord of Host? Do we, as a nation want the blessings of God? We all dream but the difference between our dreams is that while others turn their dreams into reality, some decide to jettison their dreams and move on in search of food to eat.

What is interesting about the building of this cathedral is that, Muslims in Ghana have not criticized the building of the project and the state is not going to finance the project with state resources. What then is the problem with these critics? When I watched my black and white TV the other day and saw Bishop Palmer Buckle and Rev. Opoku Onyina discussing the issue of the building of the cathedral with the National Chief Imam, I couldn't help but to clap my hands for the most revered Sheikh. Surprisingly, the Sheikh donated an amount of GH¢50,000 towards the project. And you, a Christian who attends church every Sunday to pray to God is saying you will not donate a dime towards the building of the cathedral. God is watching from afar. The Abrahamaic faith is made up of Judaism, Christianity and Islam. Here in Ghana Christians and Muslims have lived peacefully since time immemorial. What is dividing us is politics. Some politicians try to capitalize on anything to canvas for votes. They don't even care about the relationship between God and us the citizens. If even they will poke their finger in the eyes of God to come to power, they will do it. That is very unfortunate indeed. Just check the background of those kicking against the building of the cathedral and you will know where they are coming from. They are the heirs of those who once ruled this nation with iron hands and got their hands tainted with the innocent blood of Ghanaians. They remember what God told David and they know they cannot build a cathedral in honour of God. Unlike David, they have not repented and still looking for an opportunity to pour more blood on the ground. Call them descendants of Cain and you will not be far from right. Don't come for me oo! I did not mention names but if you think the cap fits you, wear it.

President Akufo-Addo told Ghanaians that in his quest for political power, he had promised God that if he became successful, he will build a cathedral in His honour. God blessed him and he became the President of Ghana and so the ball is in his court to honour his promise. If you thwart the effort of anyone who has promised God, you will incur the wrath of God. Those who continuously kick against the building of the cathedral should remember that God's fury is very dangerous. It may come in different forms and you may not know why it came upon you.

Legacy is a word Ghanaians take for granted. The world over, leaders aspire to leave behind a legacy before they depart. If this cathedral comes to reality, Nana Addo Dankwa Akufo-Addo will be leaving an enviable legacy for generations yet unborn to appreciate. If that is the reason why his detractors are peeved, who cares? There are people in this country who have jealousy injected into their blood cells. To them anything which will inure to the benefit of Ghanaians is a threat to their political ambition. That is why anytime the President sneezes, they catch cold. If you have well educated persons kicking against the introduction of free SHS, you must look at them with a third eye. They have nothing good to offer Ghanaians except to criticize unnecessarily and disturb the relative peace that we are enjoying. They will eventually belong to the dustbin of history. It's a matter of time.

Cigar connoisseurs will tell you that no matter how rich you are, you sometimes buy the cheapest cigar in order to know the difference from the top quality ones that you puff. I have in my 'arsenal' one of the cheapest cigars in the world called Davidoff Cigarillos, produced in El Salvador. Better keep your distance because the aroma is nauseating.