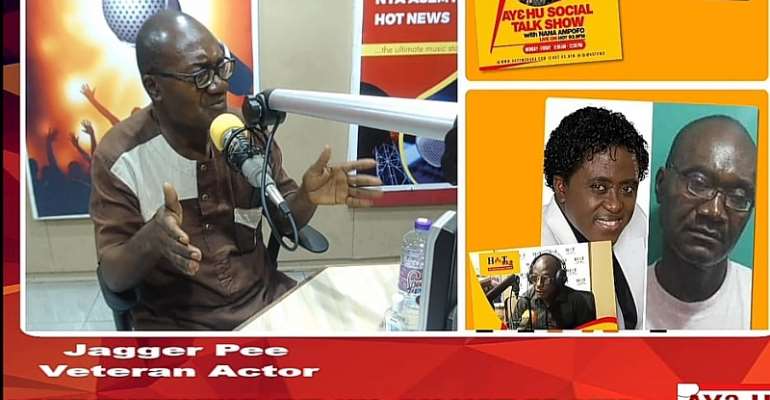 Veteran actor, Abeiku Nyame better known as Jagger Pee has alleged that Ace Ghanaian Musician turned Pastor, Nana Akwasi Agyemang, popularly known as Gemann jubilated when he (Jagger pee) joined the latter in the same cell after being re-arrested during their murder trial.

Jagger Pee who was one of the leading actors in Ghana in the 90s made a tremendous contribution to the Ghanaian movie industry. He was sentenced alongside then friend and music star, Gemann in 1996 following a shooting incident at the CFC Flats, Dome in Accra killing a taxi driver.

The taxi was hired by Nadia, a female friend of Gemann from Odorkor. According to Nadia, the fare agreed upon was GHC3 but the taxi driver insisted it was GHC4.

Gemann thus refused to pay the difference and in the scuffle, he ran into his room and brought out a pistol with which he shot and killed the taxi driver after giving a warning shot.

Jagger, who was alleged to have hassled the taxi driver and was holding him before the shooting was convicted for abetment of crime.

Gemann was sentenced to death while Jagger Pee got a life sentence but former President John Agyekum Kufuor’s amnesty in commemoration of the country’s 48th independence anniversary pardoned the legendary movie star after serving two years at the Nsawam Prison.

Gemann who had also been released after serving 13 years, 4 months, and currently promoting a yet-to-be-launched book on his ordeal, titled ‘From Fame to Shame...Untold story of the shocking journey from pop stardom to death row’, in an interview on TV3 accused Jagger Pee of turning against him.

According to Gemann, Jagger Pee who was first to be released never visited him when he was still in Prison.

Responding to Gemann's accusation against him in an exclusive interview on "Ay3 HU' - a social talk show hosted by Nana Ampofo on Accra-based Hot 93.9FM, Jagger Pee astonishingly stated that:

"Gemann jubilated when I was re-arrested during our trial at the High Court...When I was arrested for the first time, i was bailed but there was prima facie evidence against me at the High Court that I was the one who held the taxi driver in order for Gemann to him.

"I was then remanded during the court hearing so I joined Gemann in the same court cell while I was waiting for someone to come and bail me again... Gemann who was happy that I had been re-arrested started jubilating by dancing and singing when he saw me," Jagger Pee told Nana Ampofo.

The song literally means whether Akpeteshie or Guinness, we are equally drunk in the Akan dialect.

15 Assembly Members, others granted bail for cursing Regiona...
52 minutes ago

I wanted to turn down Accra Regional Minister job because I ...
58 minutes ago