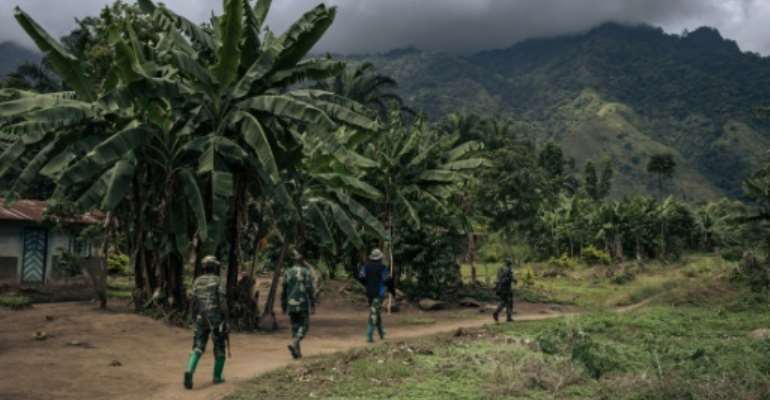 Congolese troops patrolling the village of Mwenda earlier this year. The village lies in an area that is notorious for attacks by the Allied Democratic Forces (ADF). By ALEXIS HUGUET (AFP)

Eleven children aged nine to 17, including five girls, have been kidnapped by presumed Islamist rebels in northeastern DR Congo, a local official told AFP on Tuesday.

The rebels, thought to be members of the Islamic State-linked Allied Democratic Forces (ADF), abducted the group in a village in Ituri province on Sunday evening, according to Dieudonne Malangayi, acting chairman of the chiefdom of Walese Vonkutu.

The rebels erupted into the Bundingili area where the village is located, and kidnapped "all the civilians who were there, men, women and children," he told AFP by phone.

More than three kilometres (two miles) away in the bush, the militants "freed the men, women and some young children," but kept the 11 other children.

"We don't know what happened" to them, said Malangayi, who is also a representative of civil society.

The ADF, historically a Ugandan Islamist group, have been accused of killing thousands of civilians in Ituri and neighbouring North Kivu province.

No fatalities occurred in the latest raid, but "according to our analysis and the testimony of the freed civilians, they abducted these children to train them to become fighters," Malangayi said.

Since May, the provinces of North Kivu and Ituri have been under a state of siege, replacing civilian authorities with army and police officers to fight armed groups.

The ADF, which the United States has deemed a terrorist group, is considered the deadliest of scores of armed militias that roam the mineral-rich eastern Democratic Republic of Congo.

On August 18, a contingent of US special operations forces arrived in the area to help the Congolese army in their fight against the ADF, US and Congolese sources said at the time.

In a separate incident in eastern DR Congo, one person was killed and seven were injured late Monday by "armed bandits" in Karisimbi, a district in North Kivu province, local mayor Jean-Paul Elongi Wandikia told AFP.

The local hospital said it had admitted eight people with gunshot wounds, one of whom later died.

Karisimbi lies in the Goma area, which is notorious for murders and armed robbery.