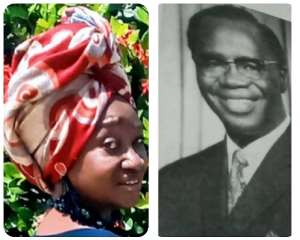 Dear Dad: Every 28th August, my soul gets pierced, afresh. A vital part of me got buried with you, Yet, your Essence is alive in me, Still. On this your death anniversary, I intone a dirge not for you, but for the country you so loved, lying in amoral ruin.

can and must be rebuilt; by overseeing not selfish, but selfless, inclusive democratic governance. "Tete wo bika Tete wo bi kyere. Hwe na sua, hwe na dwen" ie Review, Re-think and learn.

It is with this burning hope that I introduce the "Kofi Abrefa Busia intellect and essense Lives-on, revisit", in your timeless inspirational wisdom to the youth, politicians both in government and in opposition and the nation as you direct a shining path to true freedom for a life in dignity. Pray ho, Let us Listen intently to Rebrand.

K.A. Busia Essence: "My great purpose is to study all I can and then when the time comes, to pour out my life in the service of my God and my country. KNOWLEDGE is USELESS unless it makes us better SERVANTS of humanity". Dec 4, 1939

At Independence: "We pray that the BIRTH of our country as an Independent Nation...may mean for us also, a mental and spiritual rebirth and a fresh dedication of our talents to the HONEST AND DEVOTED SERVICE of our Country and Generation. Parliament excerpt, March 6, 1957

The Busia Mission: " I asked for two years leave of absence without pay from the University College Council, because I felt an obligation to give my time to politics, to help ensure sound parliamentary democracy, to secure civil liberties, true freedom and HIGH STANDARDS OF PROBITY in PUBLIC LIFE. Sept 28,1958

Because: "An intellectual is a person who has learnt to use his brains, who applies his mind to problems and ideas and tries to understand them. There are many illiterates who are intellectuals" May 18, 1969

***K.A. Busia in focus :" I think the best test of an educated man is the width and depth of his heart; the extent of the circle of men and women for whom he feels an active sympathy; the kind of sympathy which makes him do something for others to alleviate suffering or correct wrongs or extend opportunities for others to live happier, nobler lives. Dec, 1969 .

Busia Definitive Democracy: "Democracy is a form of government, but it is based on ethics. At any rate, real democracy can flourish only in an atmosphere of kindness, affection, benevolence, and sympathy" August 1, 1957

Role of Opposition: " Our task while we are in opposition is to protect the best interest of the country by helping to build up public opinion against THE BAD ACTIONS AND LAWS OF GOVERNMENT".... An essential democratic right is that the minority should be able to ;.. above all create public opinion.

"The democratic political system ... presupposes a diversity of political views and alignments. We therefore do not look upon those who disagree with us as enemies or rivals whose views and actions we should always summarily dismiss" Nov 8, 1969

"Physical enslavement is tragic enough, but the mental and spiritual bondage that make people despise their own culture is much worse, for it makes them lose their self-respect and with-it faith in themselves"... (Challenge of Africa) ... "We have no reason to be ashamed of our ancestry; on the contrary we have every reason to be proud of our heritage" Nov 22, 1969

Busia nationalist Ambition: "My ambition for the nation is that in everything we do .. in all spheres, we should do it in such a way that we can look anybody in the face...This is how we are going to show our equality with the rest of the world" Dec 5, 1969

• The Busia Creed: "Those who are heroes, those who live forever, are those who lay down their lives so that as a result of their suffering, sacrifices and self-giving, those who come after them may have freedom" Nov 20, 1969.

Busia National invitational: I invite you to join us in the high adventure of building a great nation ...in all aspects through dedicated self-giving service in probity and efficiency... in our public life, in government, agriculture, in industry, in raising standards of living and well-being in stability and peace. May 2, 1969

Busia In Focus: "Our aim is to create a democratic welfare society ...which will enable everyone to be the best he can be and to give to the full, the best that he can give in service towards progress and prosperity". August 13, 1969

• ON Economic Independence: "We cannot be economically independent unless the economy of Ghana and the whole financial network is to a large extent in the hands of Ghanaians themselves. Therefore, the progress Party supports wholeheartedly a policy for the Ghananization of the economy of Ghana". ..

• "Until we are able to provide from our own resources most of the capital, energy and skills needed for the development of this country we cannot be genuinely free, and our achievement cannot be lasting" June 29, 1969

• Rural Development Impetus: "I know there are people living in Accra who say my government is a bush government and that I am a bushman. I like it you know, I don't mind this and I don't feel sorry. It is true that I come from the bush. I am a bushman so I have sympathy for the bush people. When you go to his hometown in the bush and see his children around him living in dirt, living in darkness, when he has helped you to do what you are doing, what does your Conscience tell you? September 7, 1971

"My government has committed itself to the people of Ghana to modernise in a general sense, the rural areas of the country where the majority of the people reside; to provide good drinking water, health and sanitary facilities, extend rural electrification and expand education facilities in a determined effort to bridge the gap between the rural and urban areas to correct imbalances in development"

We consider it unfortunate that a country like Ghana blessed with abundant rain and good soil should still remain a net importer of foodstuffs rather than a net exporter, we shall introduce an agric policy which should result in a relatively short period in the modernisation of agric .. for consumption, for export and in the production of raw materials to feed our local industry". Oct 23 1969

" The government which I have the privilege to head is pledged to uphold our constitution ..Our internal policy will be based on our yearning concern for every individual citizen. Oct 19, 1969

Civic Education /National Living Principles:**"Let us learn to be each his brother's keeper, let us build a brotherhood that transcends the boundaries of tribe or creed or political party victory...a concern for each other, a sense of fair play and justice in our relations and a hatred of corruption. These are human virtues which we cannot sidestep without catastrophe"

" Let me ask you who are listening to me now a question. What can you do to help your country? As I have often said, Everyone can help. One of the marks of responsible citizenship is voluntary service. The service which one gives to ones nebor and country out of care and concern. Sept 30 1971

National Service: * Everyone can help, however much he has in education or skill or however little. We hope training in the National Service Corps will eventually become an avenue to government service, in corporations and private firms and also that others through it will be able to set up their own independent businesses...

• We want our citizens to be self-reliant and enterprising. We want them to look less to government and more to their own initiative for employment". Launch of national service corps Dec15,1969

• KA. Busia Youth Legacy: " let me say that if you are going out and have not the compelling urge inside you to make something better, to improve some situation or condition then you really are not living and will not make much of a mark in this world and you will not be missed when you leave it... You who are young have the exciting chance to build a better society, to leave the world a better place than you find today. March 9 1968. Address to students

Dear Dad, You sacrificed global academic acclaim, to trailblaze a common humanity ideology in governance and uplifted the African race by your brain power and wisdom utilization for socio -cultural awareness and economic emancipation. You dedicated your life to a search for African democratic blueprints and left excellent footprints for an entire continent. You are one of those unsung, vilified heroes who live forever through the many lives you have touched and the legacy you have left that vindicates your truncated vision and your life's quest.

"Damirifa due due Papa". It is Unfolding history including the abysmal moral leadership vacuum, not those who pay empty lip service to your ideational mission that will accord your rightful place in national and continental significance.

I cannot help but be tearful about the dog-eat-dog enclave without scruples, your country has become instead of " each his brothers keeper" you purposed. I stand my ground in unflinching defense of your true vision, as you rightfully said: "There are forces of the human spirit which no arms, imprisonments, threats or intimidation can overcome" 21 dec 1964.

Fellow Ghanaians, what are you doing to actualize this inspirational great Ghana, K.A. Busia- agenda in your own life for national good after missing the time of our visitation; look around, do you see a Busia- inspired governance in Ghana today? I dare say, Certainly not.

Let me end with a K .A Busia wisdom nugget that speaks Truth to Power: " Democratic societies accept the view that all human beings are fallible. No one is omniscient; no one has a monopoly of truth; no one

embodies or expresses the will of the whole people "...( ie Tikoro nko agyina)

"Those who govern may command wide popularity at a particular period, but that will not prevent them from erring, through misunderstanding, or lack of sufficient knowledge, or self-delusion, or corruption, or insensitiveness, so that they do not care how their actions affect others" " K.A. Busia- Africa in search of democracy "

"The sweet heady wine of power is apt to besot and turn rulers into oppressive tyrants " Oct 1,1969.

Is this not Prophetic for our times, to those who have ears to hear?

Therefore, " let us ensure that the plaque of arbitrary rule, dictatorship, nepotism, bribery, corruption and godlessness .. shall never return whatever the tricks and inducements of those who seek its return may seek to entice us " sept 3, 1969.

Thank you for being a sage who speaks eternal truths with proofs for national refocus and reconstruction in a universal moral language of democracy. Damirifa Due. DO REST IN PEACE DEAR DAD. May God be with you till we meet again. 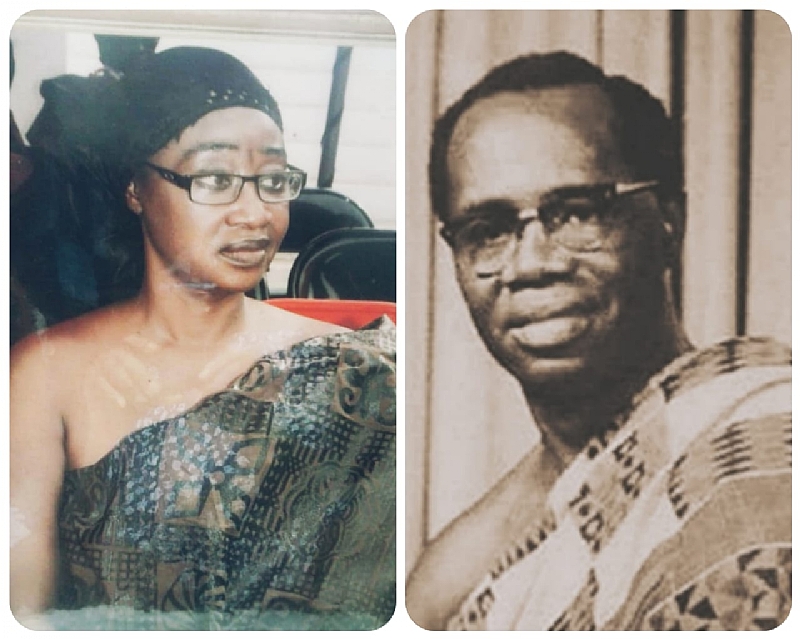