A Holy Castration For A Holy Kissing Priest 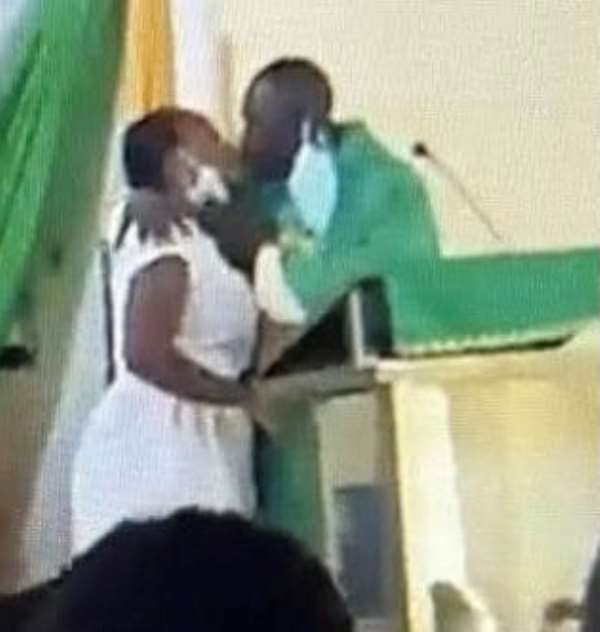 Women have been marginalized in our society for years and that’s one reason for poverty in Africa.

We treat women like Slaves instead of Partners no wonder our Men die early leaving the Women behind.

Men are allowed to marry 5 Women yet it’s an abomination for a woman to marry two men.

Women have fought back these inequalities in times past and even though it’s been difficult they have achieved some success and a typical milestone was their 1995 declaration at the Beijing Conference in China.

We’ve also had our law enforcement institutions setting up units like WAJO, DOVSU etc to lawfully protect women from primitive minded men who still think women are their slaves.

One way Women have sort to empower themselves is through EDUCATION and even in that space they have faced their challenges of foolish lecturers demanding sex before passing their papers.

We’ve heard of men demanding sex before employing them after they’ve gone through all these struggles to reach the job market.

Yes, women are a weaker vessels but without them, there is NO Life and it’s therefore the responsibility of Society to Protect them from foolish and irresponsible primitive minded Men.

Due to this facts, the State have provided us with a Gender Ministry specifically for Women & other Gender issues and we expect them to live up to expectations especially when we have laws to back and protect the right of Women.

Society will be full of stupidity yes men who will justify foolishness but the laws must be applied to protect the weak and not to embolden idiots.

When a Male lecturer decided to go on a sleeping spree with his Female students before grading them and got featured on international News Channels what did we do as a country?

We suspended him for some months, brought him back and rewarded him with a higher post so you’ll ask yourself how is the state helping the cause of Women’s Rights and Empowerment?

I’m aware of some religious beliefs that does not allow you to touch the palm of a female yet we have an Anglican PRIEST who is suppose to be a LAWYER and at the same time a CHAIRMAN OF THE DISCIPLINARY Committee and finally a Religious Father of a girls school now standing in front of his Students and forcefully Kissing 3 female students and as I type today we are yet to hear a word from the GENDER MINISTER, CHIRAG or the POLICE DOVSU unit with regards to this Sexual Harassment, the Abuse of their Rights and the breaking of the COVID Protocols respectively.

As for those playing with the issues we can allow them display their foolishness in fact it’s normal in this country but as far as some of us are concerned we’ll follow this issue Vhimfully and make sure Justice is served in order to serve as a deterrent to those who are planning not to just kiss but to sleep with them in front of congregations ni ) mu gyimeee nu.

In South Africa recently a Male supervisor and his company were fined a fortune which was paid to a female worker who he ATTEMPTED to Kiss please take note of the Word ATTEMPTED.

Fact is we cannot continue getting away with such stupidity in this country because we have a Society to build and these scapegoats must face the Laws in order to serve as deterrents.

Like I said earlier the VHIM CREW is watching every step that’s being taken in this Anglican Kissing Priest matter.

The news of him being sacked from the school is a non starter because for someone who is a LAWYER and a so called PRIEST we expect him to know better since people like that shouldn’t be left off the hook especially when we all know that Ignorance of the Law is no excuse not to talk of a Lawyer.

In conclusion, let me ask you just one question, do you think this He-Goat Priest would have kissed them as a reward if these students were boys in a male school?

Holy Castrations won’t be bad for his punishment for the Holy Kisser I guess.