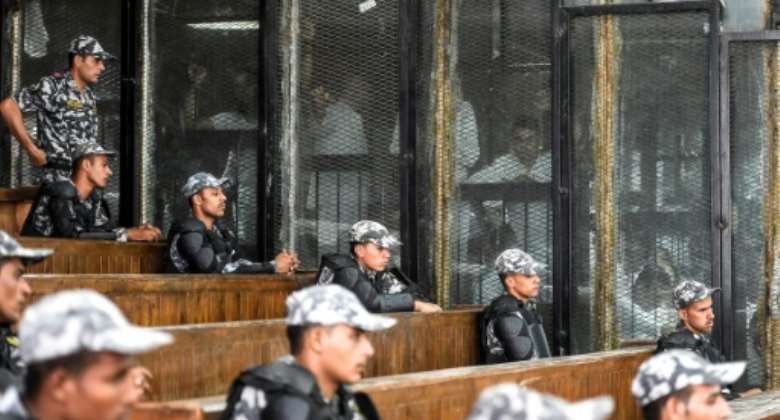 Egyptian security peronnel line the public gallery as Muslim Brotherhood members appear in the caged dock at a trial hearing in July 2018. By Khaled DESOUKI (AFP/File)

After surviving the bloodshed when Egyptian security forces killed some 800 people in a sprawling Islamist protest camp in 2013, 12 Muslim Brotherhood members are on death row waiting to be hanged.

For their families, it is an agonising wait, knowing their loved ones could be executed at any moment, without warning, having exhausted all avenues of appeal.

Brothers Mahmud and Adam, who spoke to AFP on condition their real names not be used for fear of repercussions, said their inability to do any more to exonerate their father was a constant source of anxiety.

"The pain of his absence has grown worse now he's been condemned to death in a final verdict and he's going to die no matter what. It really is a disastrous situation," Adam told AFP.

The 12 prisoners facing imminent execution were among 739 defendants prosecuted in a mass trial that the United Nations condemned as a travesty of justice.

London-based human rights group Amnesty International accused Egypt of seeking to divert attention from the culpability of the security forces for the August 2013 mass shooting in Cairo's Rabaa al-Adawiya Square.

"It has become increasingly clear that the Egyptian authorities are intent on shielding security forces from any accountability for their role in the Rabaa massacre," the group's Middle East and North Africa deputy director, Lynn Maalouf, said.

"Authorities have instead chosen to exact revenge on survivors (and) families of victims."

AFP reached out to judges involved in the death sentences who declined to comment on the controversial case.

All of the defendants were found guilty of all of the allegations on the charge sheet, without individual criminal responsibility being established.

Their convictions and sentences were upheld by the Court of Cassation in June, in a final judgement that cannot be appealed.

"I found out from my sister and I completely fell apart in that moment. This regime doesn't care about anyone if they're from the Brotherhood. They think it's fine to execute him and throw him in the bin," Adam said.

Relatives of Muslim Brotherhood members facing the death penalty try to wave to their loved ones at a hearing in December 2018. By Mohamed el-Shahed (AFP/File)

At the time, the authorities said the thousands of protesters demanding Morsi's reinstatement were armed and their forced dispersal was a vital counter-terrorism measure.

No Egyptian official has ever been tried over the killings.

The Muslim Brotherhood is one of Egypt's oldest political movements, with spin-offs around the Muslim world, but later the same year authorities outlawed it as a "terrorist organisation".

"How can you in a blink of an eye be called a terrorist, sentenced to death and denied visits from your family?" asked Adam, who like his brother, has been refused permission to visit his father since 2016.

"How are governments silent about this? Or is it that it doesn't matter because he's from the Brotherhood? It's really upsetting."

Mahmud, the other brother, called the trial "farcical" because his father had been unable to meet his lawyer even once since his arrest in August 2013.

He said his father has been languishing in solitary confinement for eight years at the Scorpion Prison, one of Egypt's most notorious jails.

"Our lives are literally in their hands being played with like a yoyo," Mahmud told AFP.

"We've experienced so much trauma that we've become numb."

Eman, a mother of two in her 30s who also asked that her real name be withheld, said she considered herself comparatively lucky as her husband is still allowed to receive family visits.

Thousands of Egyptians demanding the restoration of ousted Islamist president Mohamed Morsi had joined the protest camp in Cairo's Rabaa al-Adawiya Square which was bloodily broken up by troops and riot police. By FAYEZ NURELDINE (AFP/File)

"He's in good spirits knowing that he's clearly innocent," she said after visiting him at a remote desert prison earlier this month.

"He knows that the verdict is supposed to crush him and make him upset but he's coping well, sending letters to the children," she told AFP.

His most recent letter to his children was a drawing of a "happy family".

For Eman's husband, who has accepted his fate, drawing has been his lifeline during his long wait in prison, most spent in a two metre by two metre (seven foot by seven foot) cell shared with three other inmates.

His wife said she had prepared her children for the worst.

"From the first day, my husband said we want to come out of this with as little psychological damage as possible. So he really encouraged me to lead my life and raise the kids as normally as can be," she said.

"This is the reason that we've kept on going for so long".