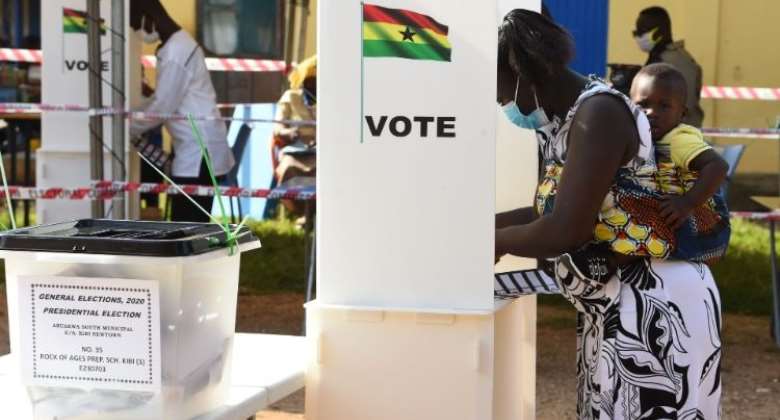 The opposition National Democratic Congress (NDC), has made some proposals for reforms to be made in Ghana’s electoral system.

Among the suggestions put forward by the party is the appointment of electoral commissioners to be subject to prior parliamentary approval.

The party said the current mode of appointments makes the EC appear partisan.

The other proposals concerned matters of law enforcement, media coverage, the legal status of the Intra-Party Advisory Committee and the structure of the EC.

The NDC said the recommendations were informed by perceived flaws in the 2020 election, which spawned a presidential election petition after John Mahama rejected President Akufo-Addo's election victory.

Below are the full proposals by the NDC:

1. Provide for prior parliamentary approval for appointment of EC members.

2. Repeal the requirement for the consent of the AG to be given before the prosecution of electoral offences.

3. Specially-designated courts should be appointed exclusively for electoral disputes and offences before, during and after registration of voters and elections.

4. EC should be allowed by law to apply to the courts to remove names of deceased and other unqualified persons from the provisional register when informed by the relevant authorities.

5. GBC should be made to comply with the Supreme Court decision for it to provide equal access to all political parties.

6. IPAC should be backed by legislation through an amendment to the Electoral Commission Act, 1993, Act 451, which should spell out its composition and functions.

7. Spell out by law the security responsibilities of the EC (if any), the police and the military during registration of voters and during and after voting.

11. The mandatory requirement for the publication of applicants for recruitment as temporary EC staff for registration of voters and for elections and for allowing the public to object to applicants who have questionable backgrounds or have overt partisan biases must be strictly complied with. The requirement for the list to be posted at the District EC offices to which the applications relate must also be complied with.

12. The EC should comply with the requirement for each political party participating in an election to be provided with a copy of the final voters' register.

13. The EC should make sure that recruitment for the various categories of election officials is made as non-partisan as possible. The available positions should be advertised and nonpartisan and competent persons selected after interviews. The selected persons should then be given appropriate training.

14. The EC should give wider publicity to the annual calendar of its activities and events at the beginning of an election year that it publishes and ensure that all participating political parties are aware of it.

15. The EC must ensure that printing houses entrusted with the printing of election materials have equipment that can print pink sheets with duplicates that can contain all the names of the candidates on one sheet when written upon.

16. The list of all polling stations to be used for an election with their names, code numbers and locations should be published in the Gazette and as supplements in the state newspapers not later than 30 days to the election. This will require an amendment to the Public Elections Regulations, 2020, C.I. 127.

18. The BVD printouts for each polling centre should be given to each political party agent or candidate's agent and should be posted at the polling station.

19. The Regional Collation Centre should be abolished. This requires an amendment to C.I. 127.

20. Parliament should be given enough time and afforded ample opportunity to closely peruse and scrutinize all proposed C.I.s for registration of voters and election purposes and the Subsidiary Legislation Committee especially enabled to object to any provisions where necessary.

21. The Statement of Poll and Declaration of Results Forms should be re-designed and simplified

23. The EC should stipulate clear procedures for presiding and returning officers on how to proceed in case of any irregularities occurring during the counting and collation process such as over-voting, non-matching reconciliation and mistakes in the results forms.

24. The EC should reduce the number of extra ballot papers supplied to polling stations for spoilage and include smaller booklets containing 20, 15 and 10 sheets so that smaller numbers of extra ballot papers can be given out. The regulation that persons with disabilities (PWDs) must be allowed to vote with the assistance of persons of their choice must be strictly enforced.

25. The EC should establish by C.I. administrative dispute resolution mechanisms for first instance grievances against decisions and actions of election officials. In particular, an Elections Adjudication Committee (EAC) should be established at the Head Office of the EC to review disputed Presidential election results prior to the EC's publication of the final declaration of the Presidential election results and the gazetting of same. The EAC should comprise officials of the EC, representatives of the political parties and agents of independent candidates that participated in the Presidential elections and stakeholder CSOs. The EC should constitute EACs with similar composition at the constituency level to administratively resolve grievances against decisions and actions of election officials at the constituency level. No court action challenging the election results should commence prior to the completion of the work of the EACs at the various levels

27. The C.I. that regulates the elections should require the EC to publish details of all election results on polling station by polling station and constituency by constituency basis on its website and in the Gazette, as well as detailed results from all levels of collation, well before the deadline for filing petitions against the results. This will, in the case of Presidential elections, mean overturning by legislation the Supreme Court decision in Mettle-Nunoo & Others v. Electoral Commission [2007-2008] 2 SCGLR 1250 where it was held that the publication of a polling station by polling station results was not necessary for the declaration of Presidential election results to be valid. It will therefore require an amendment to Article 63 (9) of the Constitution.

28. The regulation requiring that the Returning Officer at the constituency collation centre should give a copy of the summary of results sheets of the constituency to the candidates or their representatives should be strictly complied with

29. Electoral officials who breach the rules should be sanctioned. The EC itself should also be sanctioned for non-compliance with its legal obligations, including applicable rules and regulations.

30. There must be a public broadcast of the Presidential vote collation process at the EC Head Office as and when the constituency Presidential results are received.