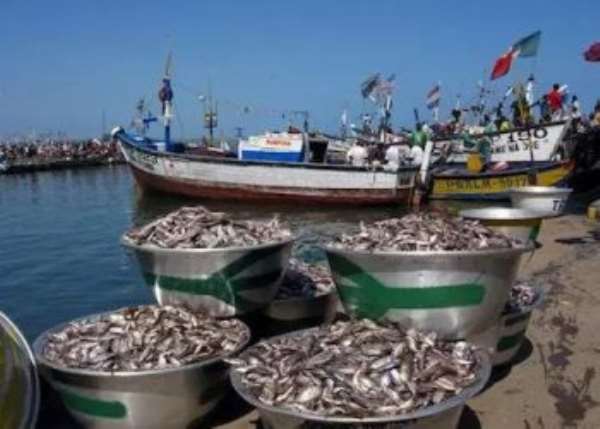 The Minister for Fisheries and Aquaculture, Mavis Hawa Koomson, on Saturday, July 31, 2021, announced the extension of the closed fishing season for fishermen at Elmina, and also denied them premix fuel as punishment for their unwillingness to stop light fishing.

She said this while re-opening the fishing season for canoe and inshore fishermen at a ceremony in Sekondi in the Western Region.

The Minister indicated that the restrictions will be lifted when there are indications of compliance on the part of the fisherfolk.

The fishermen in Elmina and Cape Coast in the Central Region have argued that a ban on light fishing will affect their work negatively.

They say since the introduction of pair trawling on Ghanaian waters, they are unable to increase their catch without the use of light.

Speaking to Citi News, Richster Nii Armah Ammah Fio disagreed with the Minister's decision, saying she should act on the existing laws in such situations.

”If you make it punishable, it defeats the purpose. Secondly, the law clearly defines the punishment for every offence. If people are using light for fishing, there are clear provisions in the law that prescribe which punishment to give. I don’t think it is right that other fishermen who may be doing things right will be affected,” he noted.

The 2021 closed season for fishing took effect from July 1, 2021, for both artisanal and semi-industrial fleets.

This is done annually to restock depleted marine fish stock.

The closed season was observed for the first time in 2019.