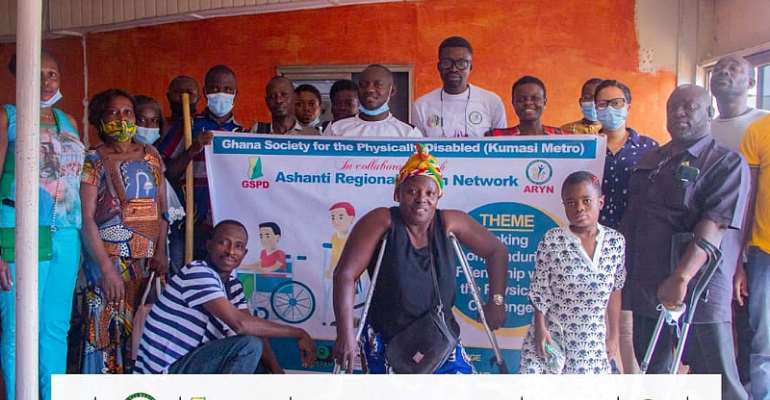 The Ashanti Region Youth Network, a network of youth led groups in the Region has met the Ghana Society of People with Disability to further explore synergies and grounds of commonalities in achieving their goals.

The workshop held on Saturday 24th July aims at enhancing the physically disabled to be dynamic and employ diversify strategies in achieving their goals.

The Regional Youth Network with support from Foundation for Security and Development in Africa (FOSDA) and Oxfam in Ghana has carried out other such engagement within the region with regional state institutions to ensure the inclusion of young people and the marginalized at all levels which include NCCE, CHRAJ, GES, GHS and other private organisations of shared goals.

Addressing the forum, the acting President of the Network, Mr Samuel Gariba in his speech expressed the readiness of the Network to include people with disabilities in their programs and activities.

He continued that, people with disabilities have been marginalized for far too long and the time has come for them to get a voice and seek their own welfare.

This, he noted is the reason he would want them to as from now participate fully in all the Network's activities.

He made a key reference to their members who worked at the Kubease toll booth which was recently demolished. They have been asked to stay home for nearly six months without any communication on when to resume work.

On his part, Mr Francis Lare Dabenkoa the president of GSPD, Kumasi Metro expressed happiness for such engagement.

He however stressed that this should not be a one-day event as they have seen much of such organizations come to them and never return.

Mr. Dabenkoa appeal to government and other agencies to factor persons with disabilities in all policy enacting and implementation.

Mr Ali Ibrahim, the representative from FOSDA also indicated that FOSDA and Oxfam in Ghana, as part of their agenda this year, will be engaging people with disabilities to explore ways of improving their welfare.

He further stated that marginalized groups like youth, women and people with disabilities must come together and unite to seek representation in decision making and this is what FOSDA and its partners stand for.