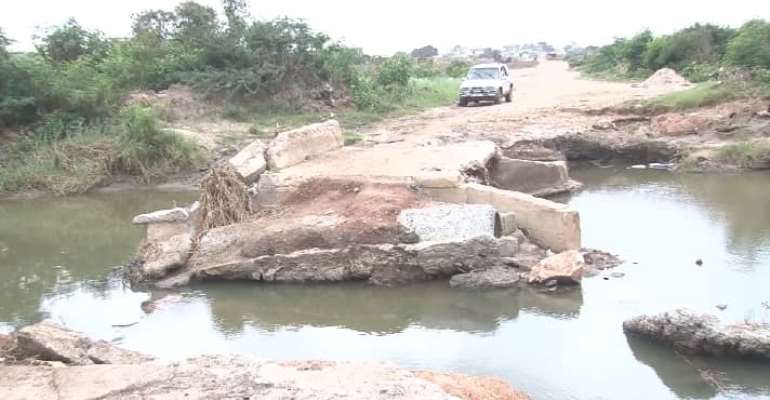 Residents of Borteyman and other adjoining communities in the Tema West Municipality of the Greater Accra Region have been cut off due to the collapse of a key bridge connecting the area.

Apart from Borteyman, residents in areas likeAdjei-Kojo, Sun City, Community 23, Promised Land, are now compelled to use a long winding and deplorable route through East Legon in Accra before getting access to the Tema Motorway which is a short distance away.

As a result, commercial drivers are taking advantage to charge exorbitant fares.

The bridge which has for years served as an alternative route to the Tema Motorway, has become a death trap and residents including school children have to use long distance or take risks in crossing the broken bridge.

Those with bicycles or motorcycles now carry their bikes before crossing the bridge to their destinations, and vehicles no longer use the route.

According to the affected residents, the broken bridge even claimed the life of a young lady some months ago when there was a heavy downpour.

KankamBoadu, a resident of the Borteyman Affordable Housing Unit, complained bitterly about the danger and hardships posed by the deplorable bridge.

He told DAILY GUIDEthat the bridge, if repaired would help the residents to access the Tema Motorway with ease.

Some residents also shared their frustrations, saying that the collapsed bridge is having a heavy toll on the socio-economic development of the area.

They claimed that the situation had given cause to some teachers and pupils to stay away from school because they could not cross the broken bridge, and appealed to the government to urgently construct the bridge.

Checks at the Urban Roads Department at the Tema West Municipal Assembly revealed that the bridge despite several complaints is yet to be captured in their budget.