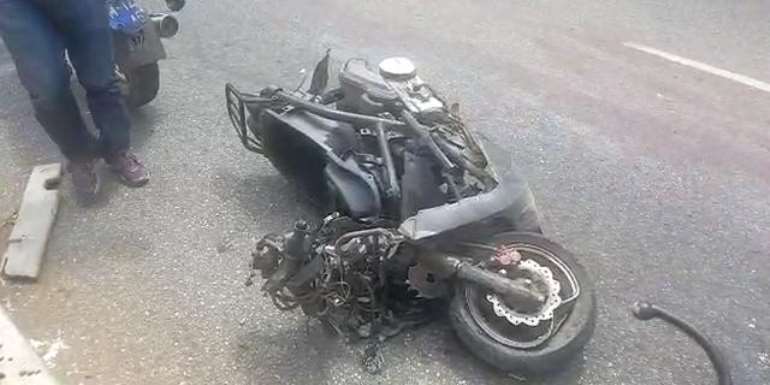 A motorbike rider has been crushed to death by a hit and run driver on Bunso to Akyem Osiem highway in the Eastern region.

The female pillion rider who was critically injured was found helpless in a bush 8 hours after the crash.

Kasapa News has gathered that the now deceased rider identified as Opoku went to pick his girlfriend Margaret Kessewa,24, from Kibi at about 9:00 pm to join him to merry at the Ohum festivities. However while returning to Akyem Osiem, the driver crashed them on the motorbike at Ettukrom stretch of the road.

The vehicle ran over the rider killing him instantly while the pillion rider crashed into the bush in an unconscious condition.

The body of the deceased was found at the roadside with intestine gushed out the next morning and was conveyed to the morgue while the female pillion rider was also found later in a pool of blood battling for life. She was rescued to Hawa Memorial Hospital at Osiem.

The surviving victim risks losing both legs considering the extent of injuries.

Brother of the injured sister, Benedictor Kwening lamented to Kasapa News, “the Police say the driver reported himself to the Police after the crash and was in Custody of Kibi Police but the Police has failed to visit the surviving victim to take her statement and facilitate securing insurance package to help pay the huge medical bills being incurred by the family. Now we are struggling to pay the bills. But neither the driver nor vehicle seen”.

A source at the Hospital told Kasapa News that ” eye witness said they were knocked down by a car who failed to stop. The information reaching me is that the driver went to the Bunso police station to report himself of the incident. Relatives of both the dead rider and the surviving lady had made numerous attempts to the police station but the police keep on telling them the driver is behind bars, my brother for almost one week now the relatives have not set eyes on the driver and the police keep on saying stories. Now the lady cannot afford the hospital bills and is really in pain. We want the driver so that the insurance of the car can cover her bills. We don’t even Know if the driver is still with the police or had been released. The police claiming they have the driver in custody for one week now had not even come to the hospital to take report neither had they even been there to just visit ”

The Kibi MTTD says it will respond to the allegations on Tuesday after briefing by the investigator.

Tunisians in largest rally against president's 'coup'
10 minutes ago