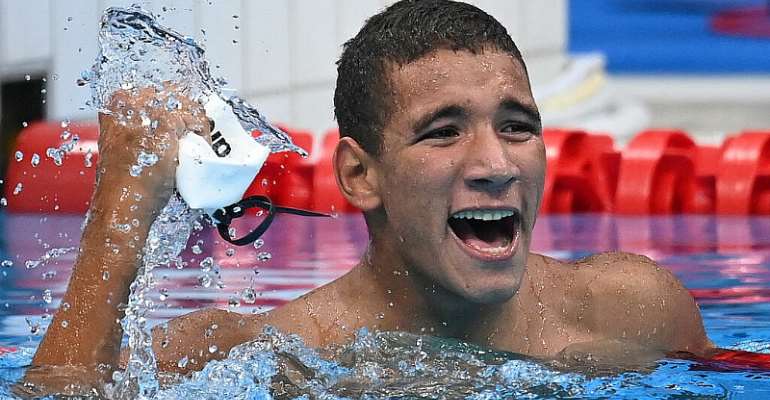 Japan and Tunisia celebrated shock gold medals on a day of upsets in the Olympic swimming pool on Sunday while Tokyo youngster Yuto Horigome claimed a fairytale hometown victory with the first ever skateboarding gold medal in Olympic history.

On the second full day of Olympic competition, the Tokyo Aquatic Center took centre stage for one of the blue riband sports of the Games with four gold medals up for grabs in a morning finals session.

But while swimming superpowers Australia and the USA traditionally dominate the Olympic pool, it was Tunisian teenager Ahmed Hafnaoui and Japan's Yui Ohashi who made the biggest waves.

Hafnaoui, 18, had only qualified eighth-fastest for the 400m freestyle final but produced a devastating late burst to win in 3min 43.36sec, overhauling Australian Jack McLoughlin, who took silver in 3:43.52.

"I just can't believe that, it's amazing," Hafnaoui said. "I felt better in the water this morning than yesterday and that's it. I'm the Olympic champion now."

t was Tunisia's first ever Olympic medal in the event and just their third gold ever in swimming.

The upsets continued in the women's 400 medley when Japan's Ohashi delighted the host nation to topple defending champion Katinka Hosszu.

Ohashi -- whose previous best performance on the world stage was a silver medal at the 2017 World Championships -- touched in 4:32.08 ahead of US duo Emma Weyant and Hali Flickinger.

"I swam believing in myself. I really did not think of winning the gold," said Ohashi.

The other early medals were split between the US and Australia.

Chase Kalisz, a silver medallist in Rio five years ago, went one better to claim the first US swimming gold of the Games with victory in the 400m medley.

►Macron at Covid-restricted Tokyo Olympics as France prepares for 2024

Skateboarding history
Away from the pool, Sunday's Olympic action saw two new sports make their bow, with the opening rounds of the surfing and skateboarding competitions.

Both sports were included at this year's Games as part of an International Olympic Committee drive to attract younger fans.

The 22-year-old, who grew up just a stone's throw from the Olympic venue, landed three huge tricks in a row to eclipse American favourite Nyjah Huston, who finished seventh.

At Tsurigasaki Surfing Beach, about 100 kilometres (60 miles) east of Tokyo, blue skies and blazing sunshine greeted surfers as they paddled into the Pacific Ocean for the men's and women's heats.

It marked the culmination of efforts to get surfing added to the Olympic programme which date back more than 100 years.

"I cannot take my mask off, but behind this mask is a very happy face," said International Surfing Association president Fernando Aguerre.

Elsewhere on Sunday, Covid-19 claimed another scalp with US golfer DeChambeau withdrawing from the Games after testing positive for the virus.

The PGA Tour said the big-hitting 2020 US Open champion had tested positive before leaving for Japan and would now be replaced by Patrick Reed.

Two-time defending men's champion Andy Murray meanwhile abandoned his singles campaign after succumbing to a muscle injury, Team GB said in a statement. He will continue in the doubles.

Osaka, who lit the Olympic flame at Friday's opening ceremony, plays her opening game of the women's singles on Sunday.

In other action on Sunday, US gymnastics star Simone Biles launches her bid to become the first woman in more than half a century to retain the all-around title.

The American could leave Tokyo with a career haul of nine Olympic gold medals, equalling the record set by Soviet gymnast Larisa Latynina in Tokyo in 1964.

Biles has not lost an all-around competition since 2013, an eight-year spell that has encompassed 19 world championship titles and four Olympic golds.