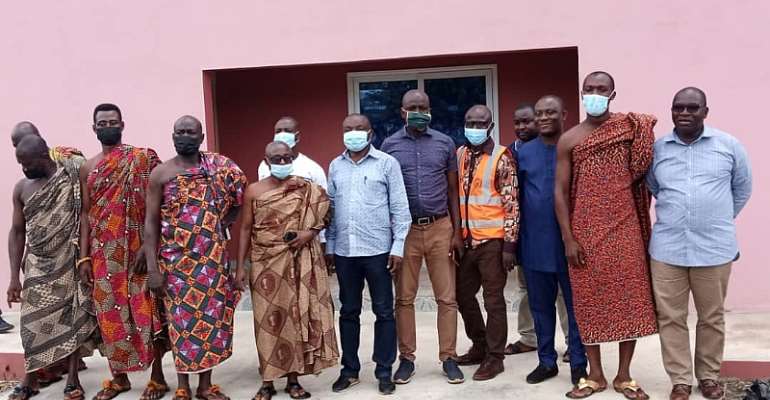 His first point of call was at Dadiesoaba Nursing and Midwifery Training College.

Under the Government of Ghana's policy of one million dollars per constituency, MBDA has constructed a modern dormitory for the Nursing Training College.

The Authority has also constructed twenty seater WC toilet facility at Dadiesoaba for both sexes which would go a long way to help the community and improve upon their sanitation issues.

MBDA has constructed a modern doctors bungalow at Dadiesoaba.

According to the CEO, the new dormitory would be able to accommodate the students in other to prevent them from staying outside the campus which comes with its negative consequences.

"There are befitting bathrooms, a place of convenience, an ironing bay and a spacious washing base. There is a mechanised water system attached to it whereby water will not be a burden for the nursing students," Mr Danquah stated.

The CEO indicated that the one million dollars per constituency which was introduced by President Akufo-Addo was meant for monumental projects like this health facility which will help to facilitate proper health delivery in this community and its surrounding areas."

The Chief of Dadiesoaba, Osahene Nana Atta Mensah stated, "On behalf of the chiefs and elders, we thank President Nana Addo Dankwa Akufo-Addo, the District Chief Executive, Mr Dwomoh Mensah and the former NPP parliamentary candidate, Yaw Owusu Brempong for lobbying such projects from the Middle Belt Development Authority. I commend Joe Danquah and his entourage such as the deputy CEO, Alex Ferka, Director of Communications, KB Asante, project consultant, Robert Sarfo Mensah and other workers of the Authority to continue with their good work."

At Nkaseim, one of the communities within the Asutifi South District has gotten a twenty seaters WC toilet facility which was constructed by the MBDA under the one million dollars one Constituency initiative by the Government of Ghana.

Nana Sarfo Kantanka, Twafo Hene of Nkaseim commended the Authority for the facility.

He appealed to MBDA for more projects to Nkaseim.

At Hwidiem, the capital town of Asutifi South District has benefitted from the one million dollars per constituency. MBDA has constructed two separate twenty seaters WC toilet facilities. The Authority has also constructed a modern dormitory at Hwidiem Senior High School.

This facility contains an ironing bay for students, WC toilet, washing base and two semidetached teachers quarters with a complete washroom and spacious environs for any other purpose for the housemaster or mistress. The same facility has been constructed at Acherensua Senior High School.

The Headmasters of Hwidiem and Acherensua Senior High Schools, Mr Frank Oppong and John Yeboah respectively, commended Hon. Joe Danquah and the entire Authority for coming to their aid.

Mr Joe Danquah assured the good people of Asutifi South to keep on supporting President Akufo-Addo to roll out more of such a laudable initiative.