Ethiopia's war in the north: who is fighting in Tigray? 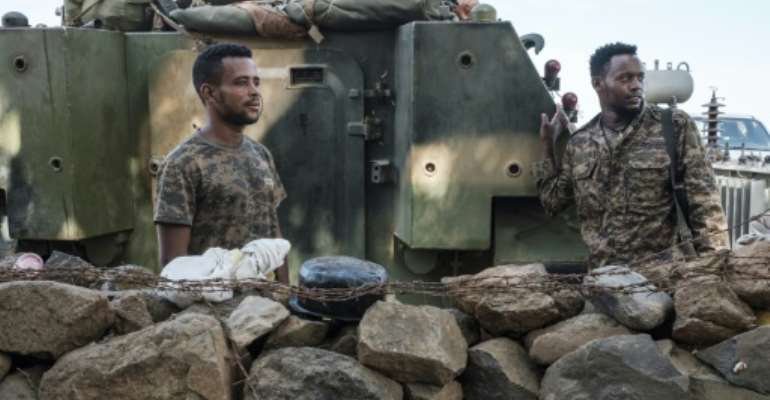 Ethiopian soldiers pictured last November at a military camp in the Tigrayan town Dansha where the first shots in the conflict were reputedly fired. By EDUARDO SOTERAS (AFP)

Ethiopia's war in Tigray is entering a new phase, with rebels advancing to the region's western and southern edges and the army vowing to repel them, leaving a government-declared ceasefire in tatters.

As battle lines shift and a fresh confrontation looms, here's a look at the main actors in an eight-month conflict that has killed thousands and raised the spectre of famine:

The ENDF is Ethiopia's national military, boasting one of the largest standing armed forces in Africa, with an estimated 140,000 personnel.

Its air force has fighter jets and armed drones.

The ENDF has considerable battle experience. Ethiopia has fought wars with Eritrea, put down armed rebellions in its regions and confronted the Islamist militants Al-Shabaab in neighbouring Somalia.

This outpost comprised more than half the military's personnel and mechanised divisions and a number of ethnic Tigrayan officers, according to the International Crisis Group (ICG).

The Tigrayans claimed the Northern Command broke with Abiy once fighting began -- an allegation his office denied.

The ENDF captured Tigray's capital Mekele a few weeks later and in December had pro-TPLF forces on the run, with their leadership retreating to mountain hideouts under a barrage of drone strikes and aerial firepower.

Abiy declared victory but in June the war took a dramatic turn when the rebels retook Mekele and other territory in a stunning reversal.

It is unclear what casualties the ENDF has suffered in the Tigray war. The rebels claim thousands have died, but this is difficult to verify and the military has not offered estimates.

The dissidents in Tigray

The TPLF dominated the political alliance that ruled Ethiopia for nearly 30 years until anti-government protests swept Abiy to power in 2018.

The TPLF chafed under Abiy and defied his rule, increasingly acting like the leaders of an independent state in the months before war began.

At the outset of fighting, the TPLF commanded powerful military forces.

Tigray and neighbouring regions. By (AFP)

The ICG said it had a large paramilitary force and well-trained local militia -- possibly 250,000 troops total -- and warned any war would be "lengthy and bloody".

They were battle-hardened, having led the struggle that toppled longtime autocrat Mengistu Hailemariam in 1991 and a border war with Eritrea that began in 1998 and left 80,000 dead before sinking into stalemate.

Abiy's government has declared the TPLF a terrorist organisation and has accused the rebels of conscripting and drugging child soldiers.

In June, the rebels returned to a hero's welcome in Mekele, parading thousands of bedraggled Ethiopian soldiers through the streets to cheers and jeers.

Their leaders came down from the mountains, vowing to push onward and reclaim every inch of their pre-war territory.

Tigray borders Eritrea, whose leader Isaias Afwerki is close to Abiy and a sworn enemy of the TPLF which ruled Ethiopia when both countries fought their brutal border war.

For months, Addis Ababa and Asmara flatly denied the presence of Eritrean troops in Tigray, despite persistent eyewitness testimony that their forces were looting towns and raping and executing civilians.

Their presence is heaviest in northern Tigray, near the border between the two nations.

Eritrea's involvement in the fighting -- and credible accounts of its troops' role in atrocities -- is enraging to many Tigrayans, and even Tigray's Abiy-appointed interim government has called for their exit.

Abiy finally acknowledged their presence in March and said their departure was imminent.

Yet analysts say it isn't clear if Abiy could make them leave even if he wanted too, or whether Ethiopia could afford to lose their support.

Regular and irregular combatants from Amhara, a large and populous region south of Tigray, have been a major ally of government forces since the war began.

These militias occupied areas of southern Tigray and seized the region's west, a fertile expanse stretching from the Tekeze River to the border with Sudan that ethnic Amharas consider an integral part of their homeland.

Over the past eight months ethnic Amharas have been returning to western Tigray and occupying abandoned homes and farmland in a state-backed campaign the United States has described as "ethnic cleansing".

Amharas claim western Tigray was stolen from them decades ago when the TPLF ruled the country.

Against this backdrop, their involvement in the conflict has fanned ethnic hostilies.

This month, as the rebels have push westward in a fresh offensive, Amhara security forces and militias have mobilised en masse and shifted to "attack mode" to try and stop them.

Three Ethiopian regions previously uninvolved in the war have also deployed forces to the Amhara-Tigray to back the government and its allies.

These regions -- Oromia, Sidama and Southern Nations, Nationalities and Peoples' (SNNP) -- are not the only ones getting involved.

AFP journalists who reached southern Tigray in December also observed special forces from the Afar region securing multiple conflict-hit areas including the village of Bisober, where shelling and shooting had killed more than 20 civilians.